The first interest of producers of antivirus, It's not exterminate viruses, but keep a constant climate of terror to increase sales. In their laboratories have all it takes to create viruses and enormous interests that will push them to do so.

At best do not create them, but surely there are growing, and every so often I miss someone.
There will never be safe.

The war of the percentages

Every year we made hundreds of classifications that dictate what “The best antivirus”. And all focus primarily on two parameters:

The power to not get caught around and climb over from viruses (We define Stopping Power) is not as high as it might appear from the ranking of “The best antivirus”. We can say with certainty, to have it tested in many real cases. And we can also say with certainty that we have never seen a virus climb over the Microsoft Security or the Defender. And c ’ is also some logic in all of this, as explained below in this page.

The conflict of interest

The commercial antivirus are not designed to exterminate the virus, If they did would earn. Their first interest is not l ’ efficiency, but sfilarvi of pocket money. Why do they use any means, to increase the percentages and leaderboards. It doesn't matter if every now and then I delete applications that are not viruses, or better yet, so increases ’ insecurity and fear. And it doesn't matter if they become unbearable and annoying, so you end up buying them. Eventually it was forced to disable the features more aggressive and discovery rates plummet.

The commercial antivirus are false friends, their interest and ours didn't coincide. C ’ is a conflict of interest which brings them, inevitably, to choose their own good and not in our.

Microsoft instead, has exactly the same interest as we do, i.e. free Windows from viruses. And also has a “Stopping Power” unreachable, because he knows the deep details of the operating system. 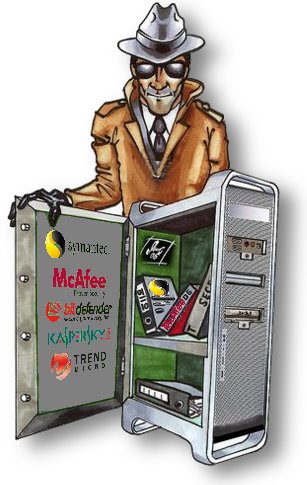 The antivirus “free” in fact they are not, they charge with small terrorist messages, hassle after hassle, they manage to finish a certain number of users and get him to buy the full version.

Of course it's a playful videos, without a precise moral. But for those who can read between the lines the meaning is clear: "The commercial antivirus, are Gangster selling security“. In Italy we also other cute names, to define who asks “The lace”.

Fortunately there is a safe alternative, terrorism by MacAfee and his shady buddies, Microsoft's free antivirus.

Free Microsoft tools, can we trust?

Everyone is always so busy speak ill of Microsoft, that becomes difficult to notice what makes good and free. Many speak of evil, because they have great interests behind, first of all the Antivirus vendors.

And, as usual, Microsoft is far more "open" than what you think:
http://www.microsoft.com/security/portal/mmpc/shared/objectivecriteria.aspx

There is also a beautiful Malware Encyclopedia:
http://www.microsoft.com/security/portal/threat/Threats.aspx

And much free software, well done and well explained:
http://www.microsoft.com/security/portal/mmpc/products/default.aspx

False information circulating on the net

In addition to viruses there are also parasites (humans). To defend against them is bene install AdBlockPlus, as explained here.

Some are actually paid under the table, others write “hearsay” and their gain is to increase clicks, earn more money with advertisements.

About computer viruses and antivirus will write to all colors, for example read this page:
http://www.aranzulla.it/antivirus-microsoft-50479.html

In this case the dear Ehow, confuses the English word “Essentials”, with the Italian word “Essential”, that means “simple” or even “minimal”. And concludes that: “Security Essentials is a commodity”.

We rewrote and waited long, but it hasn't responded, It's also paid him by one or more producers of Antivirus? Notice how insists repeatedly recommending some antivirus, and see if it offers four (BitDefender, Panda, Avira and Avast) and see if Kaspersky is missing that would have every right to appear, and even before these four. Maybe Kaspersky doesn't pay?

Uninstall all antivirus lurking in the HardDisk, preinstalled, gifts, and always ready to jump out and bite.

Is easy and quick. You will forget that there are viruses and computers will become happy and snappy.

These are not the usual test, made in an aseptic environment and reported “hearsay”, from a magazine all ’ other. Are findings made in person, on normal computer, normal users, that they took the computers you want to adjust. And we have verified that, While there are antivirus installed and working, the virus had managed to pass. While with Microsoft Security that never happened.

For many years we have installed Microsoft Security on all our computers (in the lab we use four and between co-workers and friends we get to some other ten). No one has seen a single virus. During the same period two acquaintances, one with AVG and Avast, they caught the despicable Cryptolocker. A virus that sequesters the files, and returns them in Exchange for 100 Euro, in bit-coins. No need to have a backup HD, Why did the second crypt HD. One of our acquaintances has also paid the ransom.

In January 2015, While we sailed on a site of 3D algorithms, the Trojan “Ramsom Reveton” attacked the main PC lab and was promptly exterminated by Microsoft Security. About two months ago, exactly this same virus, attacked the computers of our acquaintance, and the antivirus Avast failed to stop him. With Avast damage has been exaggerated, thousands of encrypted files and lost forever, and also very afraid. With Microsoft Security, everything was resolved in minutes, serenely and without losing any files.

An open source operating system, for example Linux, is inherently less secure because virus makers can know every detail and bypass it easily. Linux has fewer Windows viruses, not because it is better or more robust, but because it is underutilized and therefore less attractive to antivirus vendors (and viruses).

How come, We are writing this open source site? Because even the good things, If you overdo it, become evil. And therefore also the DIY must have a limit.

To build a single transistor takes days of processing, vacuum pumps and hazardous chemicals. Then a limit should be established for strength, but where? There is a point where you just make a Division and it is reasonable to place it on the border of the operating system. The demonstration of this is Linux, a superior operating system and also free. So why don't we use all? Because he lacks something, It never finished, not found the drivers, etc…

Save on operating system is like having your own wheels. It would make sense to do the tires to save? And they would be sure the tires made in the kitchen, boiling the rubber in a pot?

Bring back the Green Microsoft Security Essentials on XP

On some computers, especially older you can't install Windows 10. In these cases, you can continue to use Microsoft Security. 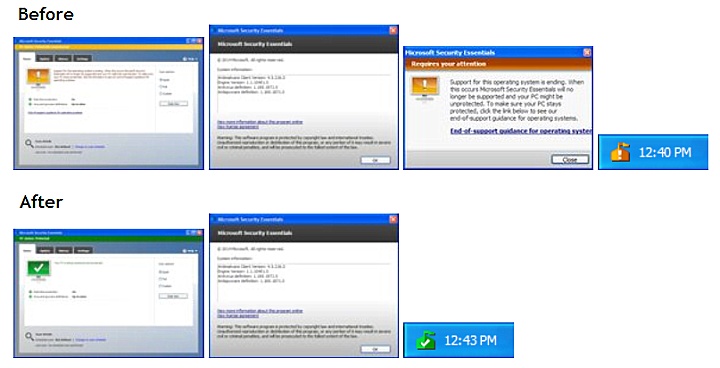 This new version is easy to install and works on PCs that had not “Security Essentials” installed. This version should no longer expire and virus definition updates continue to arrive regularly, like on Windows 10.