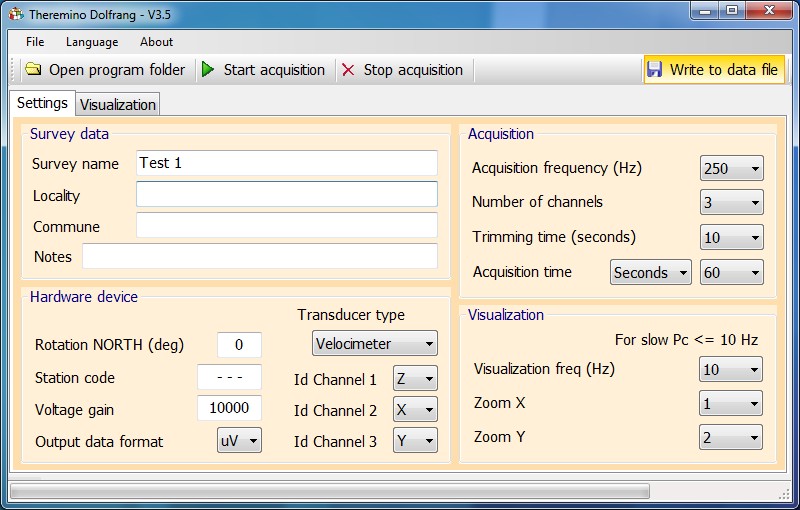 This instrument is based on the experience of Angel and Francis Dolmetta. Angelo was applications with the name “Dolfrang”, until the days of VB6 and even before. With his help we have implemented all the most useful features and simplified the user interface.

Theremino Dolfrang is a simple, lightweight application, usable even on slower computers. On average fast computer you can acquire up to 24 channels, 500 times per second, While viewing the data and at the same time they write to disk.

The format of the output file is the SAF (SESAME ASCII), that can be read by all major software for Geology. Fields are separated with a tab character so as to facilitate importing into Excel. The values are calibrated in Milli Volts or Micro volts, while also considering the voltage gain of pre-amplifiers. The number of decimals is variable so you always have the maximum resolution, with the minimum possible characters.

Theremino Dolfrang is normally used to HVSR surveys, by a triad of Geophones and with three GeoPreamp modules, or with the new ADC24 module

The two files below show, How to build a six-channel data logger, with three Geophones and a 3-axis accelerometer. Thank You Corrado Sheep, for explanations and superior images. 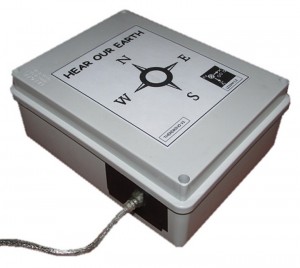 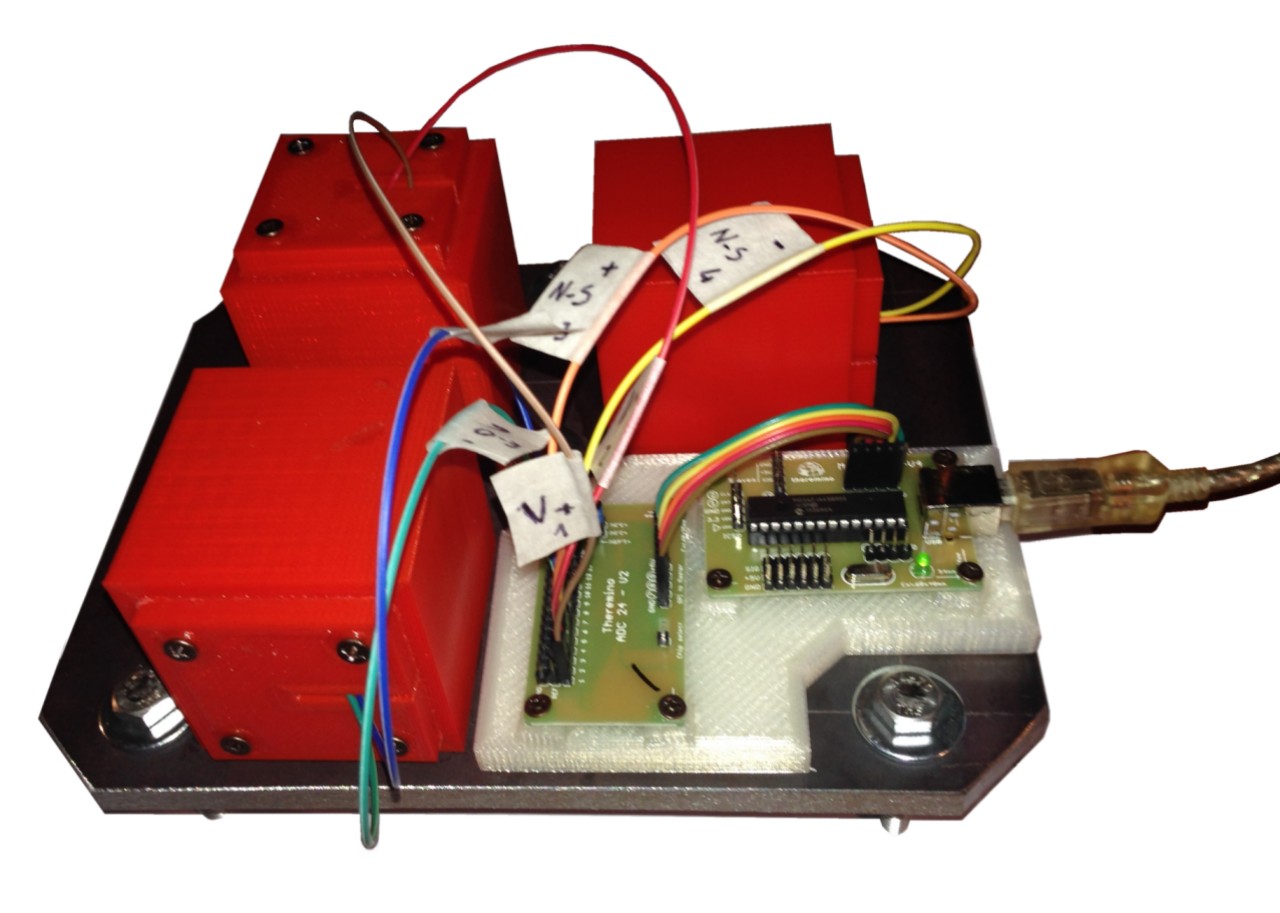 A PDF document, with images, Assembly plans and quotas, to complete a six-channel data logger, is available with this link:

This is the new version with l ’ Adc24

Thank you Corrado Sheep for these documents, simple and complete. Just look at the pictures and in five minutes you will learn everything you need.

Many tests are also available for buyers in this page:
http://www.slideshare.net/CorradoPecora/documents

If the link above doesn't work well download them from here:
http://corradopecora.altervista.org

On the following page you find good explanations for the construction and details for configuring applications.

Other applications are possible, for example you can use accelerometers and log generic seismic events, from 1 to 24 channels and up to 500 samples per second. For more information follow these links:

The application Theremino HAL, dealing with the hardware connected to the USB, is launched automatically (If there is a folder called Theremino_HAL.exe inside https://www.theremino.com/downloads/foundations)

In-depth explanations in the pages related to the Geophones, in the documentation of’Adc24 and application Theremino_AdcTester.

To consume less CPU, especially on slow computers, It's always good to minimize the HAL in your system tray and adjust the display frequency = Dolfrang Theremino 10 Hz or less. You may not display the data during the acquisition, minimize the program or by moving the page from “Acquisition” to “Adjustments”. It is also recommended to never use full screen applications (some computers are set up with an exaggerated number of pixels for the screen and both the CPU and the video card work a lot when working fullscreen applications)

Notes for versions
From version 4.0 You can change the frequency of viewing and zooming while capturing.
The version 4.1 corrects some minor errors. The button “Stop” that it is correctly disabled when you are capturing and when does a premature stop, the file is terminated with the message “Acquisition manually stopped”.
The version 4.2 contains HAL 4.4 that has again graph that shakes even on WindowsXP.
The version 4.3 contains HAL 5.1 Recognizing also the pins of the latest versions of Master and has time to 15 seconds that was missing in version 4.2.
The version 4.4 contains HAL 5.2 and has the new acquisition times: 25 , 300 and 600 minutes (10 hours).
Version 4.5 and 4.6 – Delete the flashes on startup.
Version 4.7 – Increased the ZoomY until 1000
Versions 4.8 and 4.9 – Improved the operation with the Adc24
Version 5.0 – Added the ability to manually set the number of decimal places. Corrected documentation files and the languages that in version 4.9 were wrong.
Version 5.1 and 5.2 – Adding the calibrations (Equalization) hardware. With this you get HVSR values averaging value “1”. Attention: Those who have downloaded version 5.2 prior 12/09/2016 would do well to download it again. We replaced the HAL version 6.9 with HAL 7.0 in the download file. The version 6.9 the HAL was in error easily changing Pin type.

Version 5.3 – Great improvements – Resolved in a definitive manner the following issues:
(1) Now zoom the portrait view is constantly changing from amplification 10000 (old GeoPreamp) to 128 and also to 1 (Adc24).
(2) Now the number of decimals is truly automatic and there ’ is more to worry about. Don't risk ever losing data because of few decimals. And you never even have to zoom in too much unnecessary file with decimals.
(3) Deletes the calibration page. The problems of connection of Geophones with Adc24 are worked out whereby the calibrations are no longer needed.

ATTENTION: Those who work with weak signals (-earthquakes and analysis of buildings) should definitely read the pages dedicated to Adc24 and Theremino application documentation Geophones AdcTester.

Theremino Dolfrang – CSharp language – Version 5.4
5.4 Theremino_Dolfrang_CSharp_V _WithSources
For all systems from Windows XP to Windows 10, both 32 which in 64 bit (Linux and OSX with Wine)

On some machines it may happen that Theremino Dolfrang not start. This is almost certainly due to lack of DotNet 3.5, or DotNet 4.0 that doesn't include all the 3.5 (as it should do) or it is damaged. To install DotNet read here: https://www.theremino.com/blog/tips-and-tricks#dotnet 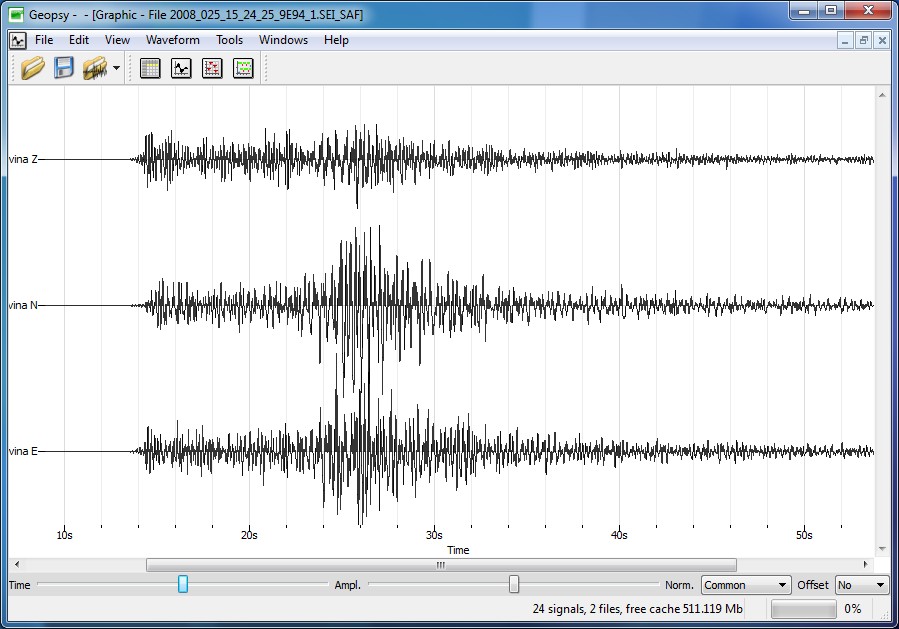 After acquiring data with Theremino Dolfrang, to view them, and do all kinds of filtering, using the excellent Geopsy.

Geopsy is freeware and Open Source, her only fault is being developed with non-standard controls, for which the adjustments are awkward and full of small faults. Not using Windows folders right operations are limited. Scroll bars Act strangely and you cannot adjust them precisely. For fine adjustments you can use the keyboard arrows, but don't act on data bars and sadistically when shooting with the mouse, taking the last position. However they are flaws of little consequence to the kind of work he has to do this application. On the other hand Geopsy have plugins for any kind of analysis.

For more information about Geopsy and Dolmetta and the blog Angel consult HVSR analysis “Community of Geology”:
https://www.theremino.com/contacts/references#dolfrang

Hate to say it but the time to do it all there is. To complete applications that are in the pipeline will take years.

Some projects are especially unfortunate for one reason or another and not dealing with anyone even though they are very important projects like the ThereminoGEO.

We will post here all the sketches also are not working or partially working so that you can evaluate them, help, or possibly adopt them.

Attention: The following softwares are just sketches. Are not working or are only partially working. 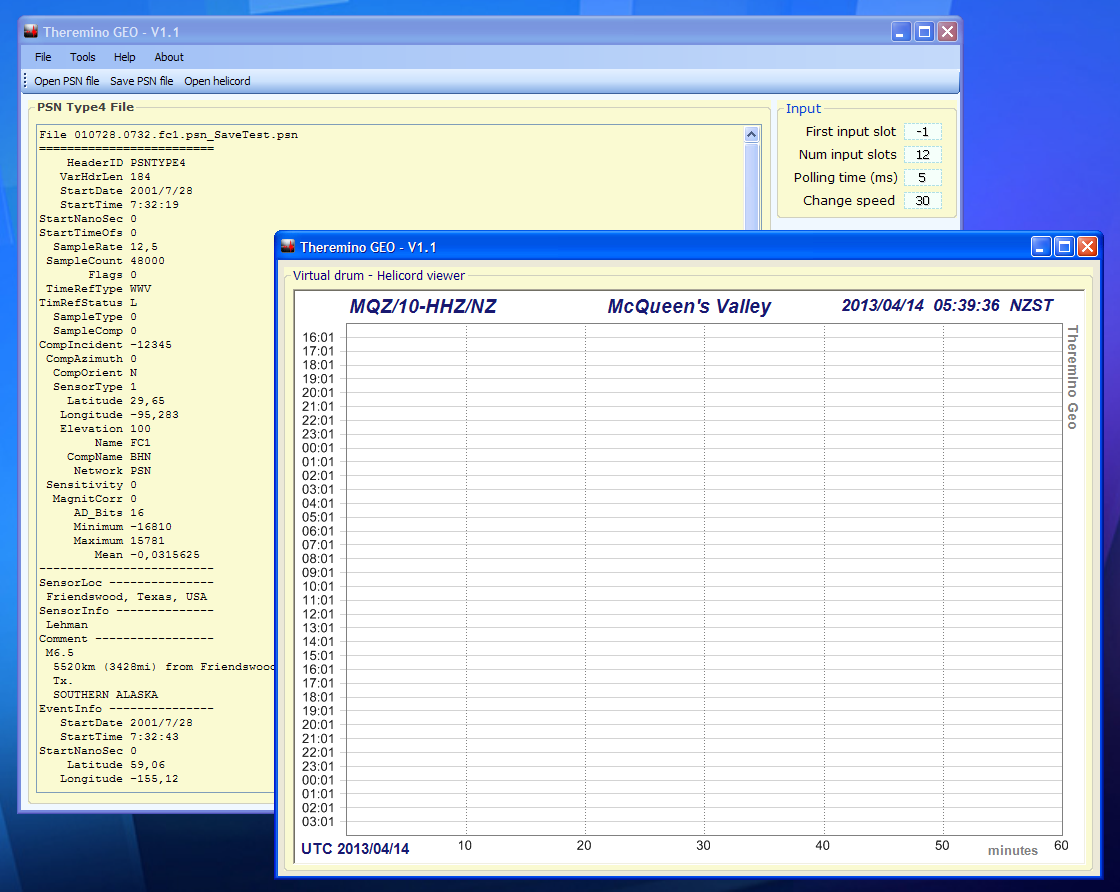 The Theremino GEO was thought to be a seismograph (seismic data logger and Viewer). Probably will be replaced by the Theremino Logger (under construction) and specialized viewers for specific analysis.

In this app. are ready, and finish, the classes to read and write files PSN (public seismic network) required to communicate data with major seismic networks. And it's also almost over the graphics of “Virtual Drum”, just missing the function that draws lines.

Why this project cannot move forward is its importance. That is, it is a project that deserves a thorough job and careful design. This means that there is never enough time and you make before all other urgent things that can be completed in a few days.

There are still reading data X, Y, Z from the slots they are connected to the sensors, storing data in a buffer and IIR filters.

Good news the project is sharing and soon we'll finally have a buyer for the seismic data.

Download Theremino_GEO with Springs
Attention: This project is only partially completed!
Theremino_Geo_V _WithSources 1.4
For all systems from Windows XP to Windows 10, both 32 which in 64 bit (Linux and OSX with Wine)

ENGLISH – HARDWARE: THE PRODUCT Theremino System IS PROVIDED TO YOU “AS IT IS”, AND WE MAKE NO EXPRESS OR IMPLIED WARRANTIES WHATSOEVER WITH RESPECT TO ITS FUNCTIONALITY, OPERABILITY, OR USE, INCLUDING, WITHOUT LIMITATION, ANY IMPLIED WARRANTIES OF MERCHANTABILITY, FITNESS FOR A PARTICULAR PURPOSE, OR INFRINGEMENT. WE EXPRESSLY DISCLAIM ANY LIABILITY WHATSOEVER FOR ANY DIRECT, INDIRECT, CONSEQUENTIAL, INCIDENTAL OR SPECIAL DAMAGES, INCLUDING, WITHOUT LIMITATION, LOST REVENUES, LOST PROFITS, LOSSES RESULTING FROM BUSINESS INTERRUPTION OR LOSS OF DATA, REGARDLESS OF THE FORM OF ACTION OR LEGAL THEORY UNDER WHICH THE LIABILITY MAY BE ASSERTED, EVEN IF NOT ADVISED OF THE POSSIBILITY OR LIKELIHOOD OF SUCH DAMAGES.

ENGLISH – SOFTWARE: THE Theremino System SOFTWARE IS FREE SOFTWARE: YOU CAN REDISTRIBUTE IT AND/OR MODIFY IT UNDER THE TERMS OF THE “GNU General Public License” AS PUBLISHED BY THE “Free Software Foundation”, EITHER VERSION 3 OF THE LICENSE, OR ANY LATER VERSION. YOU CAN GET A COPY OF THE “GNU General Public License” FROM: http://www.gnu.org/licenses