Question
How do I connect a geiger tube?
Reply
Here is a picture showing all links. (click on the image for a larger view) 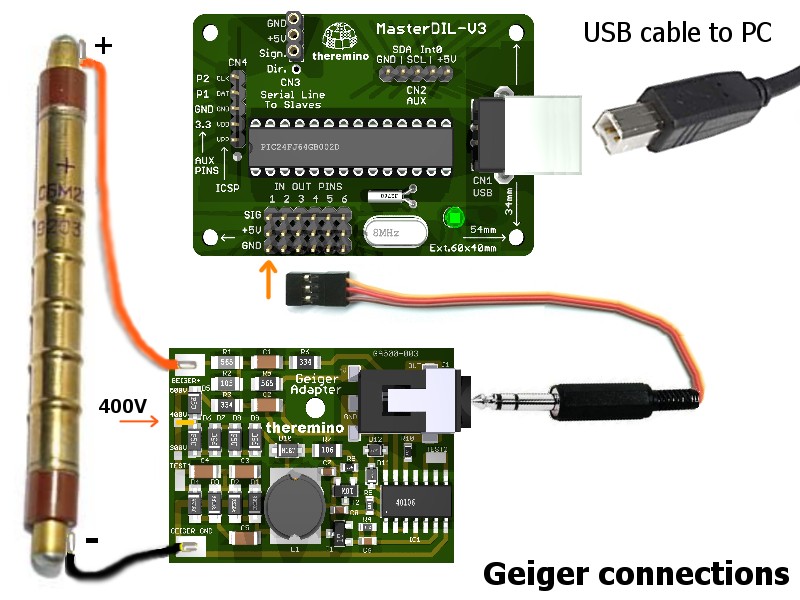 Here you can see a tube SBM20 connected to GeigerAdapter, Since it's a tube of 400V there’ a Tin jumper in position 400V. Take care to connect the positive Pole on the right side of the pipe and use wires connecting small and soft. The cable with jack is included in the price of GeigerAdapter, other cables no. Who does not have a welder may ask you to send him the GeigerAdapter with two wires already soldered and then link them to the Geiger tube with elastic rings obtained by cutting a rubber tube with scissors, or even just with two small rubber bands wrapped in more laps, or with electrical tape.

In this picture the Red wire looks longer than black but normally does the opposite, you have the Geiger tube with the positive close to the adapter so that the Red wire (with the high voltage) along a few centimeters at most.

IMPORTANT: There is no danger to touch 400 Volts with hands, You can't hear anything because the PSU is limited in power and as soon as you touch the tension immediately fall to zero.

Question
What are the recommended Geiger tubes?
Reply
The best pipe for the first experiments is the measurement that is sensible SBM20, robust and cheap. Many other useful answers are found in files of program documentation ThereminoGeiger, download it from here: downloads/uncategorized and read the files located in the folder “Docs”. In the file “ProgramHelp_ITA.pdf” There is a table with the most important features of the best Geiger tubes.

Question
Because by connecting the GeigerAdapter of the first series to pins 1 or 2 Master the master stops flashing and you disconnect and reconnect continuously from USB?
Reply
If you have a GeigerAdapter of the first series (without printing) It is better to connect the master on pins from 3 to 6. About Master all pins can be used perfectly with any sensor but don't work well with the first prototypes of the GeigerAdapter which provided impulses over 3.3 Volt. In the new GeigerAdapter, recognizable because’ include screen printing, the output current is limited to 25uA with a resistor from 33k so that the diodes inside the PIC may limit the voltage to 3.3 Volts. For more information about using the internal diodes to limit the voltage reading at the top of the page: technical/pin-types paragraph: “PIN configured as Input”.

Question
And’ possible to connect more than one geiger tube in parallel ?
How many tubes can be connected in parallel to a single GeigerAdapter ?
Reply
The GeigerAdapter can power a very large number of tubes in parallel, We tried up to four tubes but the calculations say that they could feed many more.

Explanation and calculations
—————————————————————————————–
Geiger pipes, When there is no radiation do not discharge (do not tick) and I'm almost perfect insulation, their leakage current is low enough not to be measurable.

A normal discharge Geiger tube behaves like a resistor very high (dozens of Meg) This parameter is not the same for all pipes, large tubes have a lower resistance value, the SBM 20 have a value of approximately 15 Meg.

One must also consider that when the radiation level is relatively low shocks per second are few. If, for example,, the discharges are 10 the second is the relationship between discharge time (100 uS) and resting time (100 mS) is very high ( 1000 It is up to 1 ) and the actual consumption drops accordingly only 20nA

Since the GeigerAdapter have a maximum output current of about 100uA, may feed five SBM 20 up to the maximum level of measurable radiation from these tubes that is 1000 us/h (radiation levels at which more than do measurements would be better run)

When working under the 100 us/h (that is always – If you don't live in a nuclear power plant) the number of SBM 20 is theoretically pluggable 50.

Also connect several tubes in parallel to measure radiation levels low (When levels were greater would the sensibilities of a single tube) and then in normal cases (under 10 us/h) the tubes in parallel might be about 500.

There are also other considerations on the propriety of the dead-time compensation and the physical size of the probe that limit the number of tubes that can be connected in parallel, So ultimately it is advisable in the case of SBM 20 to use 2, 4, 8 or up to a maximum of 16 parallel tubes.

Our advice is to use two SBM20 in parallel if you must measure the normal laboratory samples as the stones and small samples, or up to 4 or 8 If you want to quickly measure large objects like marble, granite or ceramic tiles.

Question
Geiger tubes wear out as the vacuum tubes?
How long have the Geiger tubes?
The SBM 20 purchased in the us are better than those bought a Ukraina ?
Reply
The difference in sensitivity between two SBM 20 If there is is very small, We sampled in dozens, from all backgrounds and they're all the same. And we never found by not working.

Geiger tubes that have a halogen gas inside are practically eternal. Instead those produced before 1920-1940 they were based on an organic gas, were consuming.

Geiger tubes son completely different from valves, I'm not in a vacuum but full of a gas, We also don't have the filament and does not get hot, don't even have the grids but only an outer tube and a long electrode in the Center.

In any case, all SBM 20 that exist were produced by the Russian army during the cold war and wherever they buy always come from the same army warehouses and have the same age.

Geiger tube life is given in “number of ticks” for the SBM 20 rated life is greater than 2*10 the 10 i.e. 20 billions of ticks. Normal use, from the lab, don't take them over 10 tick per second if not very briefly then would last at least 2 billion seconds = approximately 1000 years.

The only way the tubes deteriorate is loosing gas and when it does not work any worse but stop just to function. Just a small leak and soon cease to make Tick-tick, It happened with five LND712, paid dear, new and newly built by the prestigious LND INC ( www.lndinc.com ) Were defective factory, they worked fine for a few months, without loss of sensitivity notables and then have all stopped working shortly. (LND INC acknowledged the flaw in ceramic insulators and promptly replaced)

Question
Salve, the signal to be analyzed with the program the audio Analyzer output from the microphone jack of your sound card?
Reply
And’ better to use the AUX input because the MIC boost too and are more difficult to adjust in the mixer.

In all cases you have to use your mixer “of input” with knowledge to avoid saturation and, possibly, to match the voltage that is measured by the real one

If you are using AUX inputs and outputs the maximum signal is 2 volts peak to peak and as soon as you exceed this level we see that “Tosa” or, in some poorly made sound cards, that “from the tour”.

If the on-board sound card is not good enough then it is advisable to use an external USB connected to that would also have the advantage of being independent of the main mixer, and then would remain always tarata. Additional sound card also does not hear system sounds and provides, Typically, better and less noisy than the AUX inputs adapter that is on the mother-board between the digital signals of PC.

With a good SoundBlaster you go on the safe side but there are also cheap small cards which go very well. Over the past five years I no longer bought sound cards so I can't give you advice on what to buy.

If the signal to be measured is higher than a few volts, or if you want to reduce the influence of low impedance AUX inputs on the measuring point, It's good to do a (or two) probe 10:1 with a 1uF capacitor (non-electrolytic) +100Series k and 10 k to ground.

The 10 k to ground serves only to get a rough Division 10:1 with all sound cards. Depending on the AUX input impedance of the ballot and with some’ of attempts you could delete the 10 k and maybe increase the 100 k to 500 k or up to a Meg (If you go too on boils down too the signal, the noise increases, and it must also shield well the end of the probe)

Question
Why do my programs Theremino won't open on my Windows ?
Reply
On Windows7 (32 and 64) should already be everything you need.
On XP and on certain details Windows7, may be missing the DotNet Framework 3.5

Install the 3.5 does not require uninstalling the DotNet 4 work great together, and there must be both.

The safest procedure, who controls what's in the machine and install the right components, is as follows:

1) Open this: http://www.microsoft.com/en-us/download/details.aspx?id=22
2) Press the download button “Orange”
3) Press “No thanks and continue”
4) the file dotnetfx35setup.exe of 2.8 Mega Bytes is downloaded….
5) If not starting from only “dotnetfx35setup.exe” (by staying connected to the internet)

The DotNet 3.5 should appear in the folder “C:\WindowsMicrosoft.NETFramework”
( or in a similar folder on Windows 7 to 32 and 64 bit )