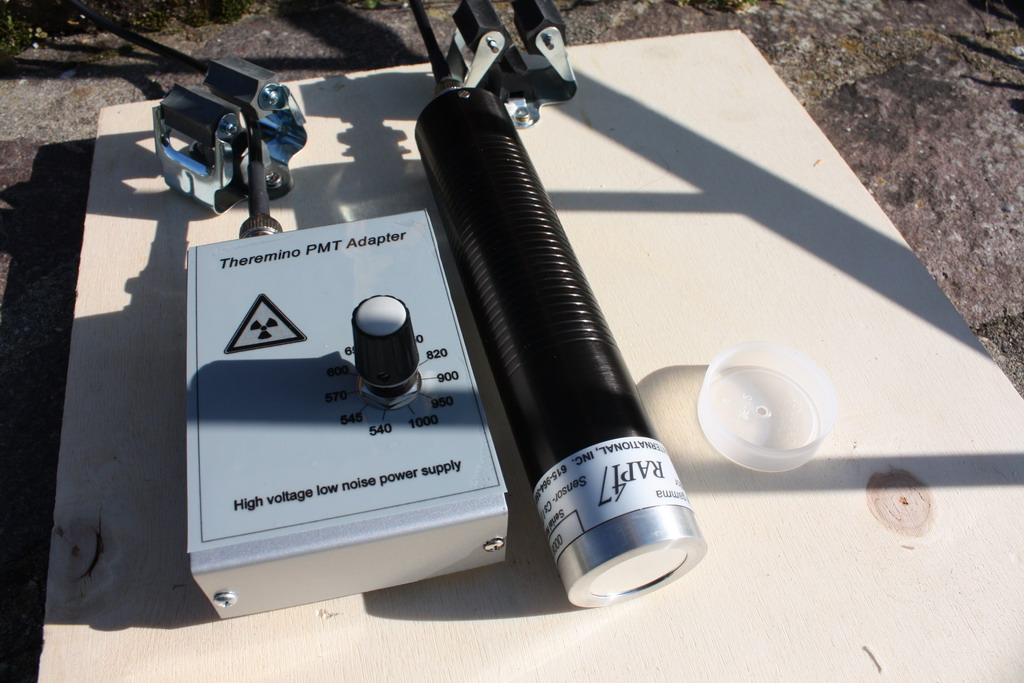 Rap47 –Editable documents in ODT format – Italian and English
Those who know these languages could open the file in Open Office, fix them and send them to us. For other languages, you can take the file and have it translated to English: www.onlinedoctranslator.com/translator.html that is great, a breeze and respects the formatting.
LEG_Rap47_Documentation_ITA_ENG_JAP 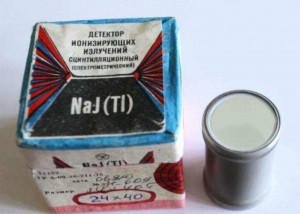 Alessio has tried these crystals and wrote a document with its characteristics. The pictures also illustrate well how to mount the Crystal in a probe over to look professional. 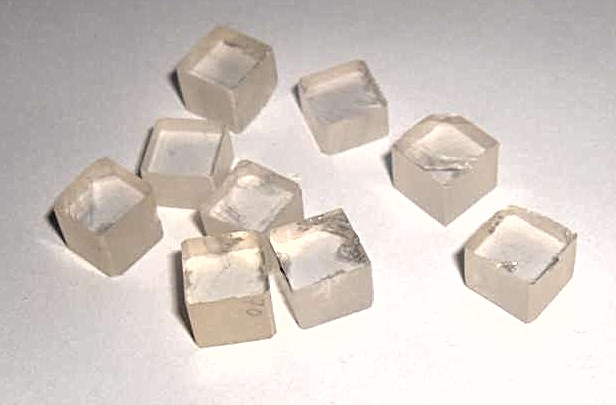 This type of Crystal is expensive and hard to find. It is also rather toxic, because of cadmium, and should be handled with gloves and mask, being for more very flaky. The probe ended, It is safe and non-hygroscopic.

The cadmium Tungstate is used mainly in places with strong radioactivity (> 10^ 4 Gray), but will endure long without damage. Has a very high density (7.9 GR/cm3) and a lower resolution than from NaI(TL), but better than that of BGO. The best resolution obtainable is around 8% (to 662 Kev).

The high density of this crystal makes it useful in making pocket sized probes, able however to detect high energy, even beyond the 2000 Kev. The light output is centered on 475 NM, suitable for coupling to a photodiode.

The decay time is very long compared to that of a Crystal NaI or CsI, the fact that sometimes leads to the need of hardware changes in FCM based on recognition of the shape. Using Theremino you can still also use this crystal, as you can see in the attached evidence.

The Spectra produced by CdWO4 are lower than those of the NaI and the light output is only one third. But the CdWO4 can detect high energies, with a third of the thickness of the NaI. Basically you can save some tens of millimetres on probe length. The table below shows the most common thickness and energy characteristics of materials.

To measure high voltages normal meters don't fit. Sometimes the scale of meters up to 1000 or 2000 Volts, but their impedance is too low.

Testers have an impedance from approximately 10 Mega Ohm, that would absorb the appliance under exaggerated power measurement 100 Milliwatts to 1000 Volts and up to a quarter of a Watt 1500 Volts. No high voltage generator makes sense (Apart from those used for executions) provides such powers. The ion Chambers and geiger tubes consume some uW (a hundred thousand times less) and the photomultiplier tubes (If wired right – with resistors 10 Mega) looking around 5 MW.

Why you should use a probe with very high impedance (at least 100 Mohm, but better if it is about 1 Gig Ohm).

You can buy commercial probes but costing a great deal…

Don't buy these probes, contain only some resistor and don't have nothing special. You can build, with less than one Euro of components!

…or you can use complicated schemes with operational, protection diodes resistors and expensive 1 gig ohm, as the following: 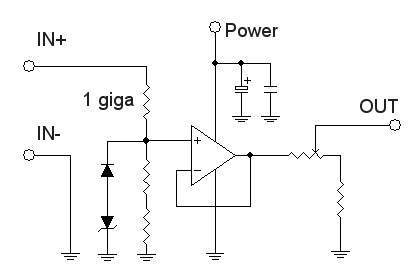 Don't be tempted by patterns like this, need power supply (battery) and cannot measure negative voltages.

To measure a high negative voltage you would think to reverse the leads but we do not recommend that you do so, is not it nice to have the mass of the circuit and then also the operational and the trimmer adjustment for voltages of thousands of volts.

Instead, you should use a simple voltage divider with a series of resistors 10 Mega o 33 Mega totaling from 200 Mohm up to 800 Mohm and divide the voltage for 1000 with a calibration resistor in parallel to the tester.

The length of the resulting Strip makes very reliable this adapter even in humid conditions.

Calibration must be done on your tester. The resistance of some testers may be less than usual 10 Mohm. Better though if the tester is exactly 10 Mohm, the adjustment will be valid for use the adaptor with traditional probes 10 Oscilloscope mohm.

With 12 resistors SMD, that cost in total 30 Euro cents, You can build a good probe from 1 Gig Ohm. The advantage of this version is to be able to stay in the container of a ballpoint pen. 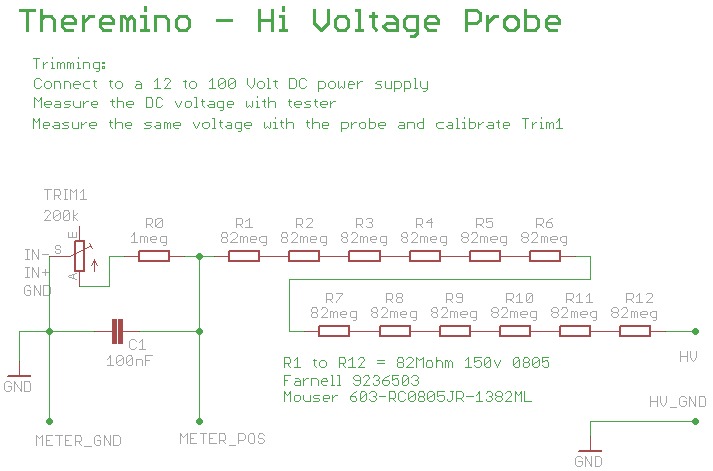 The capacitor 100nF serves to stabilize the fit of the tenths of a Volt on the tester, even with long connecting wires and unshielded. To make measurements of signals that change over time (with oscilloscope) This capacitor decreases too much bandwidth and should be delete or disconnect from one side. To go from the probe to the oscilloscope using a shielded cable or very short.

Both the tester that the eventual scope should have an input impedance (input resistance) from 10 Mega Ohm. This is normal for all existing instruments but be careful not to use analogue meter may not work (You can calibrate the probe and would change by changing load tester)

When you connect an oscilloscope, it must be ensured that the probe is set to x 10. In this way its impedance is 10 Mega Ohm. If you set the scope probe x 1 its impedance becomes 1 Mega Ohms and it is no longer possible to calibrate the probe HV.

In this file the project Eagle PCB, the diagrams and pictures of all versions: Sensor_HvProbe

We assume that a lower power supply noise 1 MV pep creates disturbances in the area of energy under 2 Kev (that no sensor manages to reveal), and then you could accept it without problems.

But if someone wants to insist might find some new solution and give substantial help to all nit (like me among other things) they want to see the baseline absolutely flat and analysis with the DAA as clean as the following illustrations. 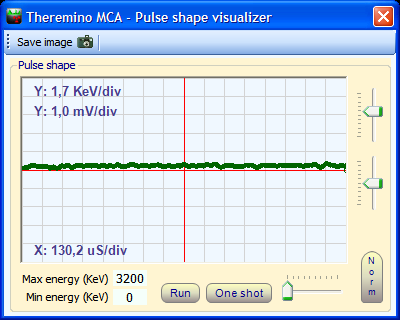 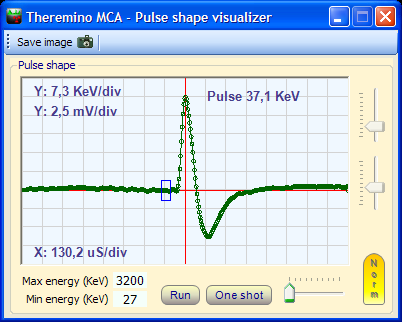 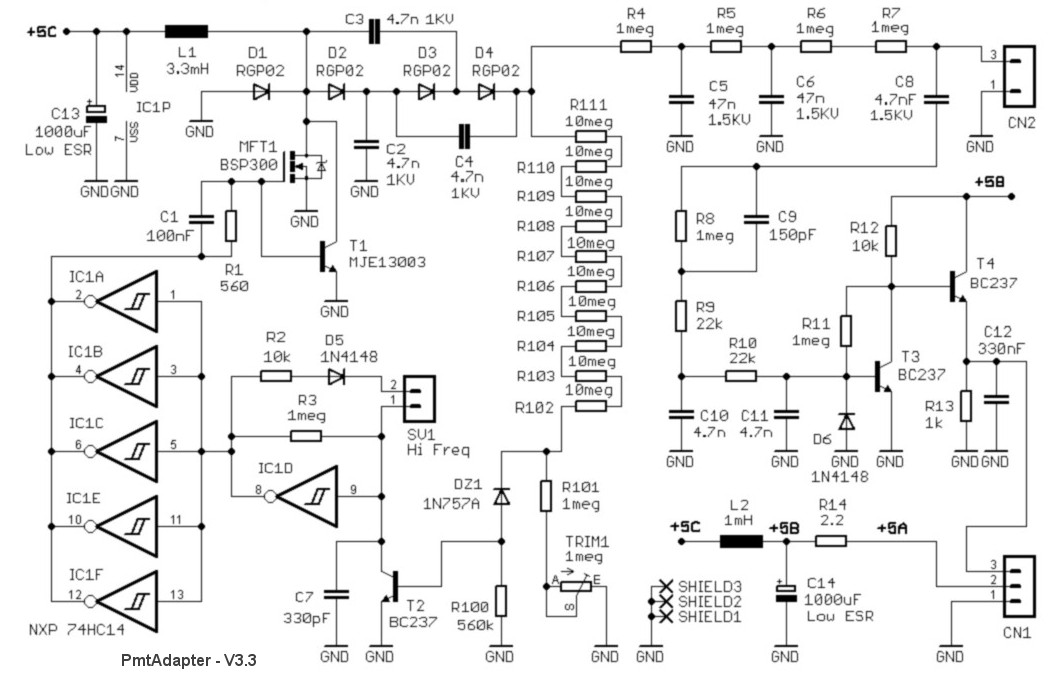 PmtAdapter scheme – Click the image for a larger view.

Between 1000 Volts and 10 There is a ratio of UV 100 million times and we are in the presence of pulses with steep faces, so high frequencies, passing through the minimum capacity thousandths of pF.

To make matters worse the PMT signal area is not necessarily high impedance (1 mega ohm) It also collects the ghosts, through the minimum capacity that exists through the air.

Looking at the diagram you can see that the left side (feeder) and the right side (signal) are joined only by four roads.

Ground loop short and Grand Chamber, that all would hold harmless, can create even dozens of mV of noise. 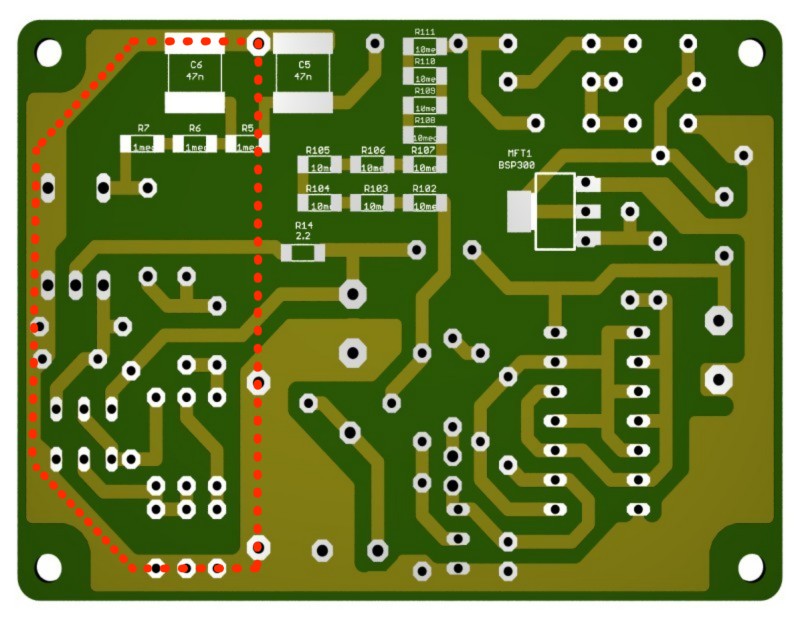 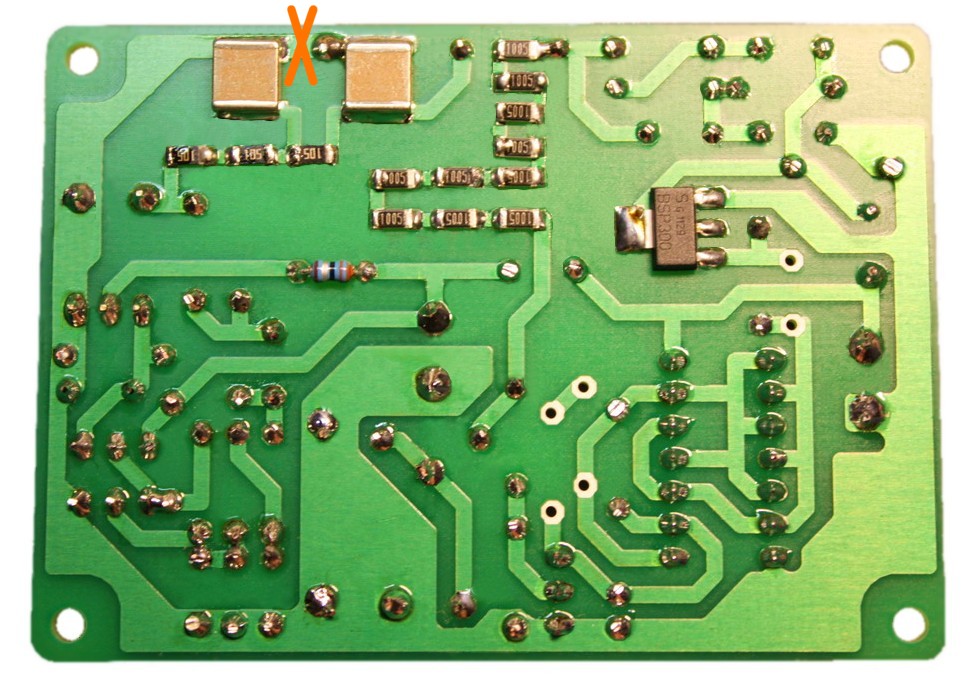 Check that the Ground-Loop of PCBs has been fixed with a cut at the point indicated by the Orange cross. (Click the images to enlarge them)

The first prototypes, with the PCB craft (get with the cutter), they behaved better and (under certain conditions of box, masses, sight unseen etc..) the disturbances came down under 300 uV pep.

The prototypes we used isolated BNC and the ground connection to the case was thoroughly in one place (through polo GND jack female), also used small boxes, just a few mm bigger than PCBS and only a trimmer for HV. So basically no wires in the box as shown in the next image. 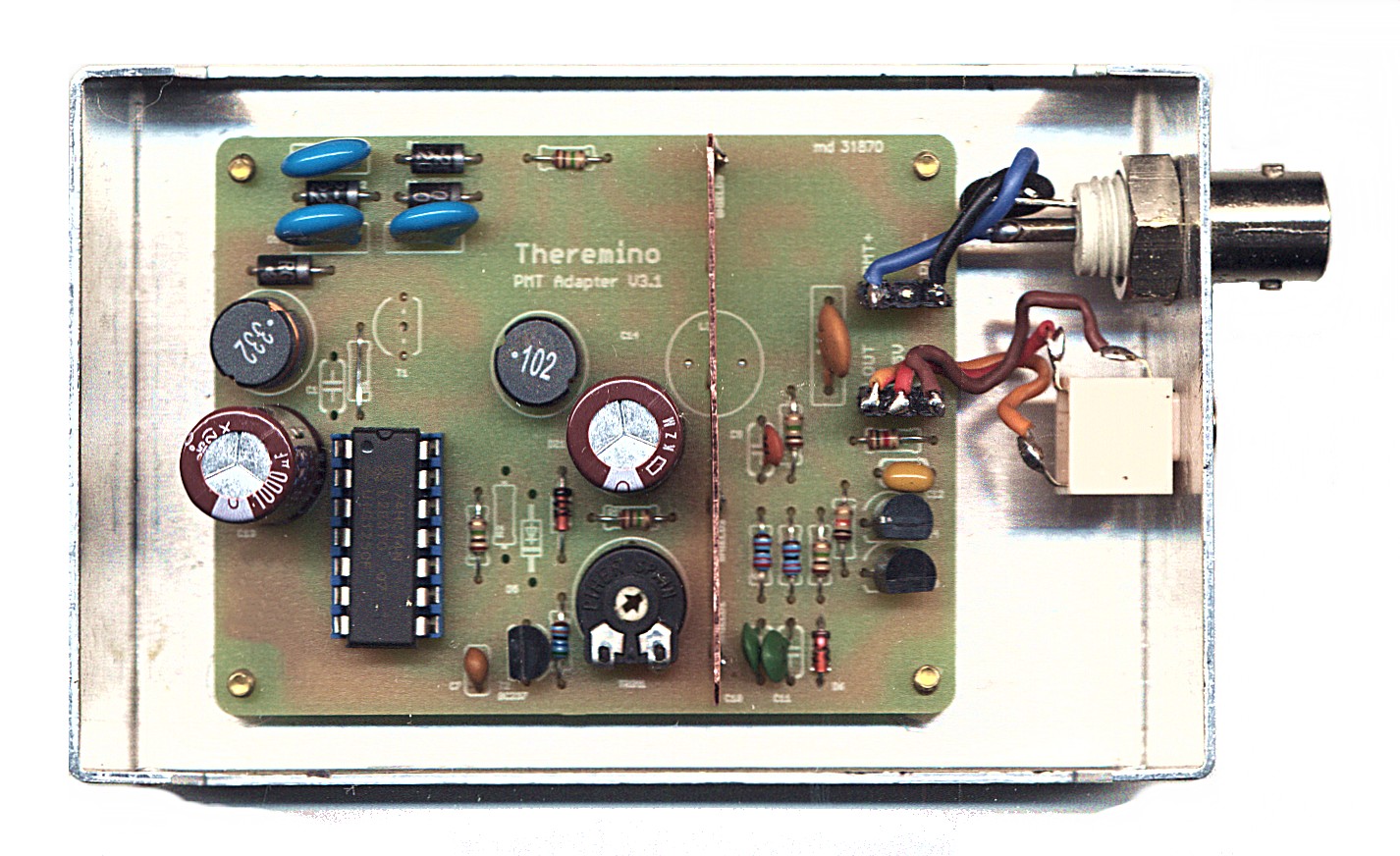 With the big boxes, the connecting wires of the external potentiometer and the new machine made pcb, You cannot drop below to 500 UV pep and no one has yet found a solution. I get send four and even I couldn't remove the tacks on high frequencies and to fall under the 500 uV pep.

(4) The minimum capacity that bypasses the screen through the air: Here you can try many solutions, use a metal container smaller, in order to decrease the area on the sides of the screen, or enlarge the screen.

Don't neglect the two connection wires between the PCB and the BNC that should be short (less than 10 mm) and must be twisted between them. Very important even crush them down in order to bring them closer to the aluminum box base.

Those who want to cut to the Chase could attempt an exaggerated care (I recommend just to picky and that when I have time I'll try in person) it comes to halve the PCB and totally separate the two halves with a metallic screen that would divide the two halves of the housing.

Finally the two wires that go into the PSU should go into two small holes on the part.

We recommend this cutting operation only to those who have a lot of time and is very skilled in electronics. There are no certainties that it's worth it, No one has ever tried to do that, but most likely this may totally eliminate noise.

Who will be able to find some simple and effective solution will be promoted super search-wizard-dott-prof Hunter of ailments and will have the gratitude of all of us!

Reduce the amplification of the Pmt Adapter

The Theremino PMT Adapter is designed, to give the best performance, with Hamamatsu photomultiplier R6095. Normally the R6095 and also other PMT, with similar characteristics, work well with “Audio gain = 2”, and a tension around 600..700 volts.

Some photo multipliers, eventually wired with resistor networks, other than the recommended (10 Mega on the dynodes and 1 Mega on the anode), can produce an output signal too high.

This condition is highlighted by the fact that you must keep “Audio gain” less than 2 and even the cursor “Energy trimmer” very low.

A signal too high, send in two Separate transistor saturation, worsens the linearity in the area of high energy and can, in the worst cases, completely masking the signals, of energy greater than a certain value.

One reads sometimes that PMT, have a fixed working voltage, but this is not true. All have a very wide adjustment range and PMT This serves to adjust their gain, Depending on your needs. 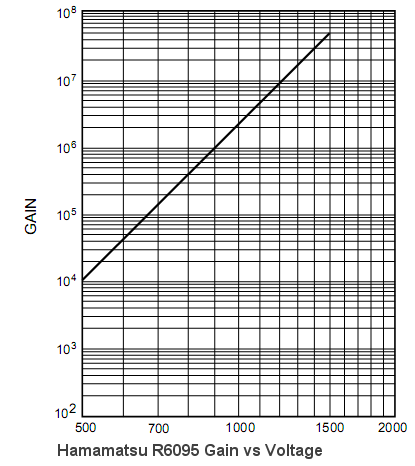 Lower the supply voltage has the beneficial effect of reducing the noise generated by PmtAdapter and reduce the risk of electrostatic, BNC connectors and capacitors.

If necessary, You can reduce the minimum voltage of PmtAdapter, even under the 500 Volts, replacing R101 with a resistor of highest value (for example, 1.8 Mega).

As a workaround, It can reduce the PmtAdapter gain.

The PmtAdapter gets bipolar pulse Gaussian and, using a delicate balance, the values of its components. So don't just adjust a single resistor. 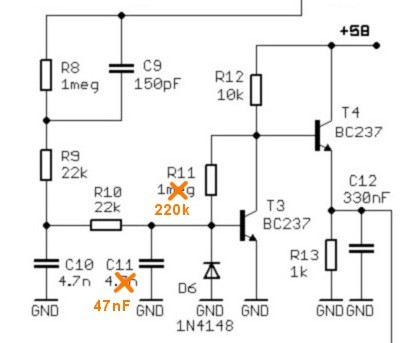 This change reduces the gain to half, while preserving the characteristics of the pulses. Given that the gain has decreased, you will have to set the parameter “Audio gain = 2”, and readjust the tension on the PMT, in modo da lavorare con il cursore “Energy trimmer”, approssimativamente a metà.