Linearization of the counts

We had an interesting discussion with an investigator, the opportunity to increase the sampling rate, using an ADC hardware from 500 ksps 13 bit. The intent of this investigator is to count the pulses, Although they are very close together. His goal is to get to 10,000 cps (compared with about 1000 current CPS).

In fact there is no precise point at which you can no longer count, but a gradual increase in the probability of overlapping of impulses (Pileup). We did some tests and we have verified that up to 100 CPS linearity is great, to 500 CPS is beginning to test a significant number of collisions.

The pulses measured in these three examples are close enough to 50, 150 and 500 CPS theorists but may change if you go out and light up some test generators. When you turn on a generator that takes a new random location in the pulse train. Two generators exactly overlaid can count by one and repeat the mistake all cycles, but this would not happen with the random data from a PMT.

You may continue until 1000, 5000 and even up to 10000 CPS, but with a gradual progressive loss of pulses (loss of linearity in the upper part of the display range)

A 10000 CPS pulse number lost, would be very high (about 90% and beyond) but it could be compensated, taking into account the progressive increase of probability of collision. The statistical formula is simple and produces a precise linearity correction. (those interested in implementing it finds in the sources of ThereminoGeiger – search for all instances of: “Deadtime”)

Linearize the response with statistical methods degrades performance resolution and sensitivity and is therefore better than acting by brute force on hardware (for example, increase the speed of the ADC or use a sample-hold)

These interesting tests they brought our attention to the bandwidth that, in all sound cards is limited to about 22 kHz. The minimum sampling rate would then 44 kHz (Nyquist law), but internally implement cards over-sampling, sometimes x 2 (and are then defined by 96 kHz) sometimes x 4 (and are therefore to be 192 kHz). In all cases the data is then interpolated to 192 kHz, generating pulses with very gradual trend. And that is exactly what it takes, to measure the exact peak of the pulse. 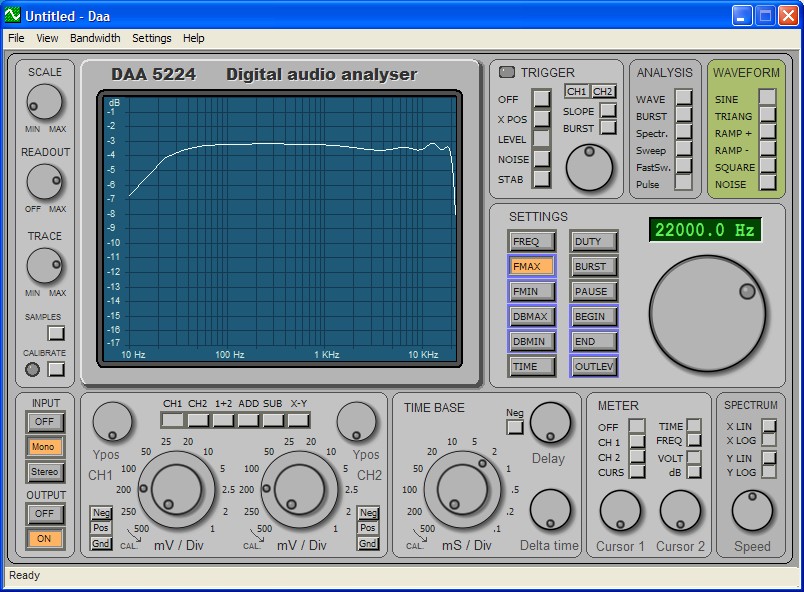 Here you can see the frequency range of sound cards, ranging from 10 Hz to 22 kHz.

If we use an ADC without bandwidth throttling, We should still integrate data, until soft pulses, to be able to accurately measure.

Without integration, the noise would be very high, because the overwhelming bandwidth. You would lose the opportunity, to see the isotopes of low energy and also the sensitivity and resolution, would be reduced.

Focus heavily on sampling frequency, at the expense of everything else, It's not a good idea. In the best case, you could increase the counts to a maximum of two, three, or at best, ten times, but in practice it would not be enough, Let's make some examples:

Earthquake sensing networks have the same problem, all Geophones near catastrophic events, saturate and their data is simply discarded.

If you use sensors can withstand these events, You should discard the same, due to the strong measurement errors caused by the discontinuity that occur near the epicenter.

The larger fragments fall into an area of tens of kilometres, making it completely unreliable all sensors in that area. Sand a fragment, such as the one found by Bionerd23 in a flowerbed (www.youtube.com/watch?v = ejZyDvtX85Y), crash sensor, This will measure the highest values, respect in the surrounding area.

You may have huge measurement errors (even 100 times), few meters. La mixture of isotopes would be completely altered, Depending on the composition of the fragment.

Take for example the German environmental network, based on 1800 Geiger sensors, spaced, on average, ten kilometers away from each other. In the event of a catastrophic event, You should discard four or even ten sensors, but the remaining 1790 provide data, that extrapolated, would make it possible to define exactly the radioactivity to the epicenter.

Quadratic attenuation law, results are much more accurate than what could be discarded sensors.

The following image is part of an article we posted after the accident Fukushima, based on data published in 15 days after the explosion the reactor 3. 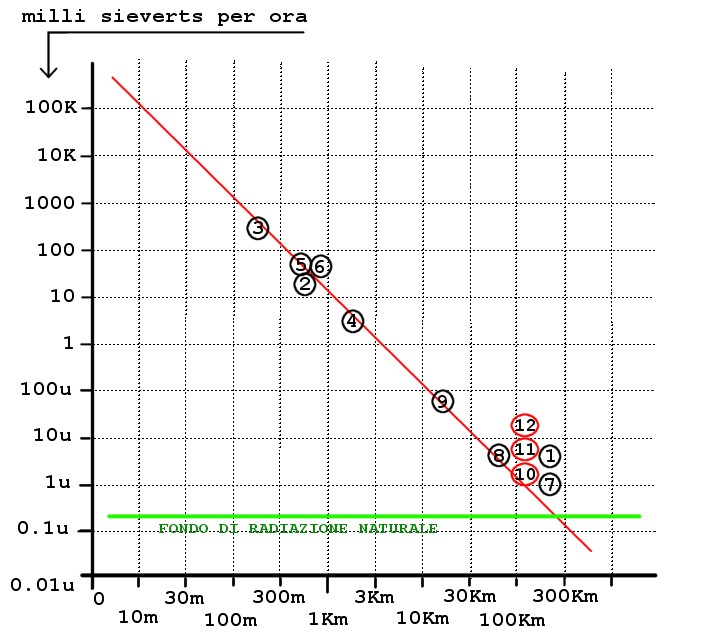 Data published by “Ministry of Education” (www.mext.go.jp), from “Nuclear Safety Division (www.bousai.ne.jp/eng) and from the town of Fukushima, After the helicopter flights.

In this picture you can notice three things:

Also note the location of measuring points closest to the explosion and their values, They also perfectly respected by extrapolation.

With a network of thousands of stations you could get a great accuracy, but in an effort do not discard data from any sensor, you degrade the quality of the entire network. Rather it would be better to proceed in the opposite direction and try to decrease noise and maximize the sensitivity and isotope separation.

With Nai(TL) the resolution is always scarce and there is the real possibility of measuring an isotope in place of another. More resolution decreases, the greater this risk. 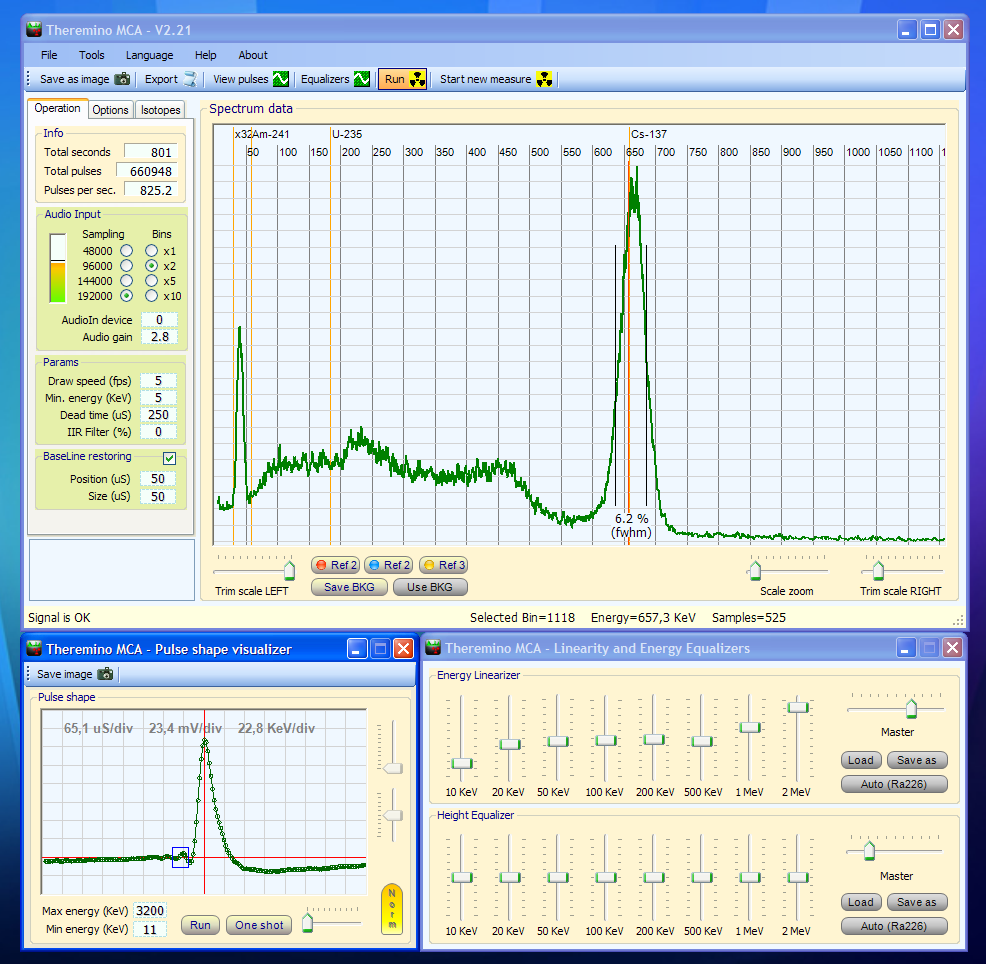 Theremino MCA uses a similar to Equalizer equalizers to linearize the energies and the amplitudes of graphs.

Many expressed doubt that this method is less accurate than that of points with selectable power (Parametric equalizer) used, for example,, in version 6 the PRA.

So you must explain the reason for this choice. 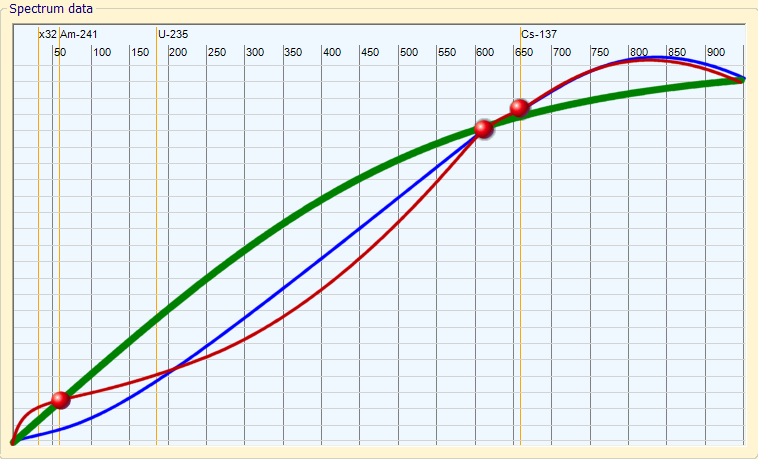 GREEN: The best linearisation curve, that minimizes errors.
BLUE: The linearization curve which is achieved by correcting “almost” exactly the 609 and the 662 Kev
RED: The final curve, After correcting “exactly” even the 59 Kev

3) Because of the inaccuracy introduced by large FWHM of the rows, and also because the number of bin is not infinite, those “accurate” fixes are not so “accurate”

4) Since the distance between the two points of correction (609 and 662) is small, every little inaccuracy extrapolates a big mistake on the entire curve of correction.

7) The user now is very happy, all 4 samples are “exactly” correct and linearity is absolutely perfect …. true?

No! The curve “invisible” result is more like a snake to a curve in the real world. Only the points in 59, 609, 662 and 1300 Kev are exactly correct, all other energies are wrong, and with more errors than they would have without the use of any correction. All future analysis made by this “happy user” detect with “accuracy” isotopes that can only be found on samples from the planet Mars.

3) Because of the imprecision introduced by the large FWHM of the rows, and because the bin number is not infinite, those “exact” corrections are not so “exact”

4) Since the distance between the two correction points (609 and 662) is little, every little imprecision extrapolates a great error on the entire correction curve.

6) The user tests a Co-60 sample at 1.3 MeV, discovers a great error, and corrects “exactly” this error

7) The user now is very happy, all the 4 samples are “exactly” corrected and the linearity is absolutely perfect…. is it true ?

No! The “invisible” resulting curve is more similar to a snake, than to a real world curve. Only the points at 59, 609, 662 and 1300 KeV are exactly corrected, all the other energies are wrong, and with more errors than before of this “linearization” All the future analisys made by this “happy user” will find with “precision” isotopes that can be found only on samples coming from Mars planet. 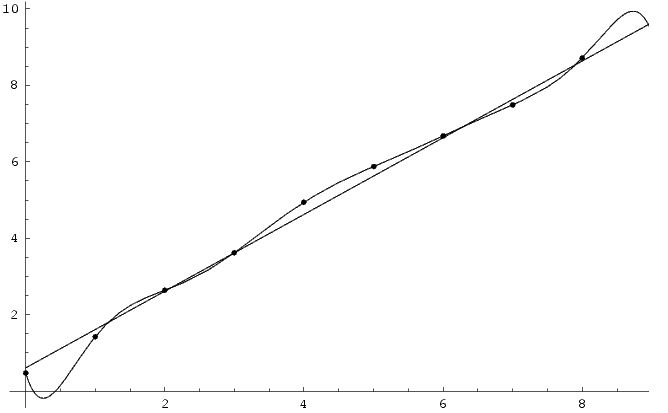 ENGLISH: Although the polynomial function passes through each data point, the linear version is a better fit.