In this chapter we will mainly talk about type batteries 18650 which are the ones used in all notebooks, as well as in bicycles, scooters and electric cars, in PowerBanks and many other small devices. 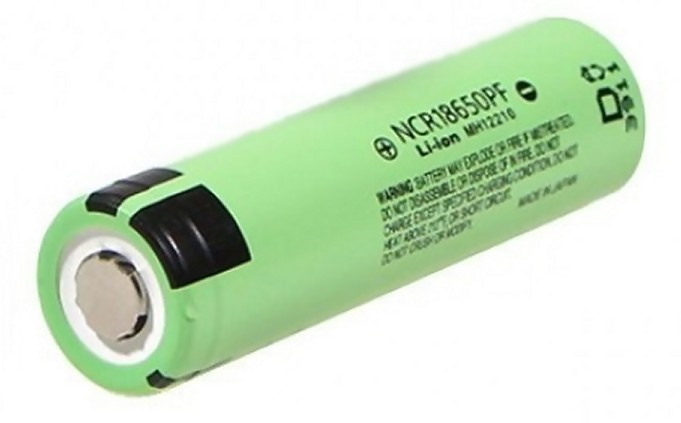 The 18650 they are the most convenient in terms of price / performance ratio and the only ones that are used when you need to store a lot of energy. 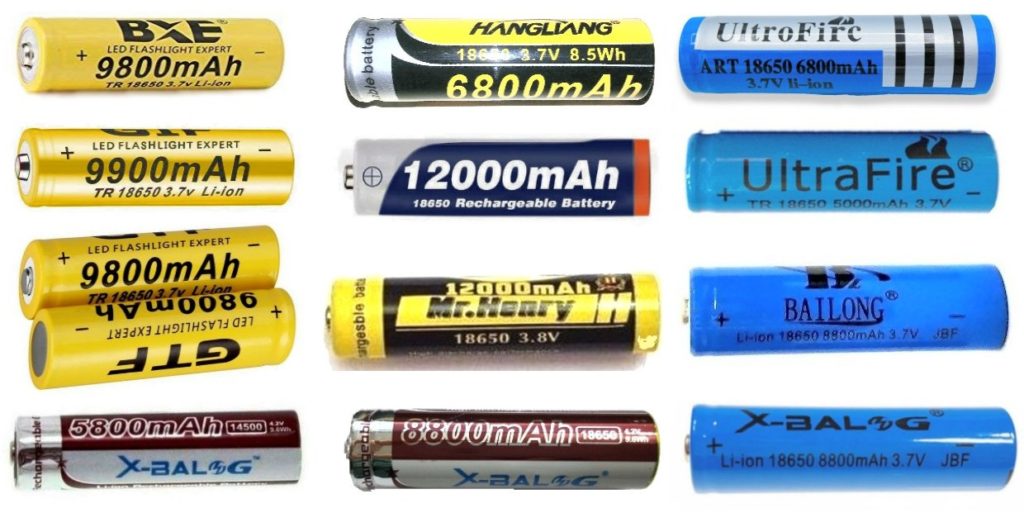 It's not just about common scams but about huge rip-offs. In many cases the actual capacity isn't just a little bit’ minor, but not even half, not even a tenth and sometimes not even a thirtieth.

We beyond the scam, we are at levels to cut off his hands.

We write this not only for the extent of the deception in terms of electrical capacity,
but for the size that this trade has taken.

Hundreds of vendors sell fake batteries 18650 and they sell staggering numbers,
stealing huge amounts of money from thousands of users every day… that often they don't even complain!

In the next chapters we will explain the technical details of this deception and how to do the tests to prove beyond doubt that a battery is a scam., but for now let's talk about sellers.

We are not saying that all the sellers of these fake batteries are thieves. Many of them are bona fide and think they sell great batteries at a fair price. In these cases we will notify them and of course they will stop selling them.

What if they keep selling them?
In that case they will end up in the list of villains that we will publish below.
Seller advised…

We have measured different models of batteries that you buy on eBay and Amazon, with the Theremino BatteryMeter application (you can find it later on this page).

The best (best so to speak, they are a nice rip off too), turned out to be the reddish-colored X-Bal that weigh 44 grams and that give about 2400 mAh (discharging them at constant current with 500 mA).

The complete report can be downloaded with This link

The worst were the blue X-Bal, that weigh 24 grams and what they give 240 mAh (discharging them at constant current with 500 mA).

The complete report can be downloaded with This link

We also tried the same batteries several times to see if there were any variations. The variability within the same model was very low and even lowering the discharge current a 200 but significantly greater capacities were not obtained.

We challenge any vendor to send us a battery that truly exceeds 3000 mAh.
If it is true that they exist, prove it !

And unfortunately it's not just about losing 8800 milliamps declared. You won't end up with a good battery from 3000 mAh, but you will have lost the money and the battery too. These scam batteries when you measure them don't even get to 2500 mAh and some not even a 250 mAh.

Some of the ones we measured gave 230 mAh, new and just loaded ! 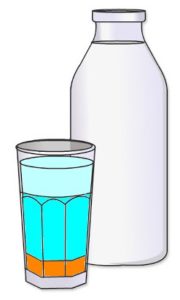 And’ as if they sold you a one-liter bottle and then inside you find only the bottom of a glass, or in the best cases a half glass.

The relationship between 8800 mAh e 230 mAh is 38 times, the same that can be seen between this bottle and the bottom of the red colored glass.

In other words it is as if they are selling you 30 liters of wine and then they sent you a small bottle, which does not even contain a liter. 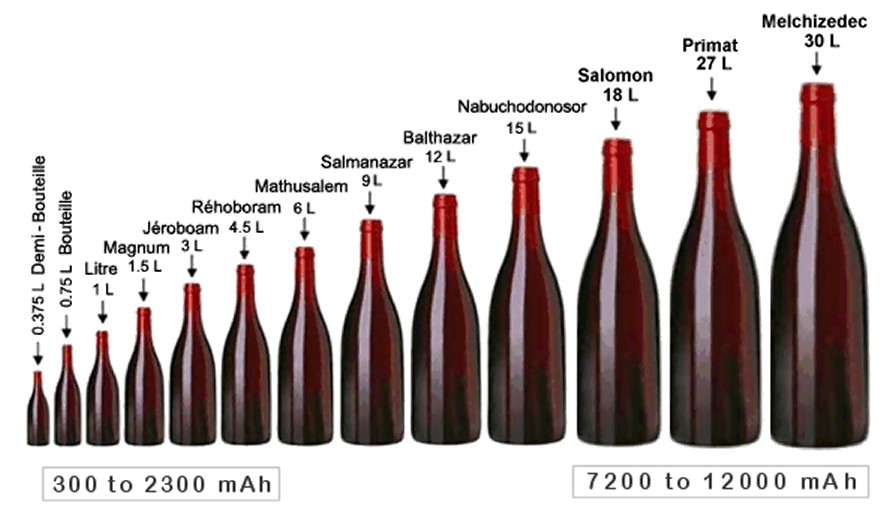 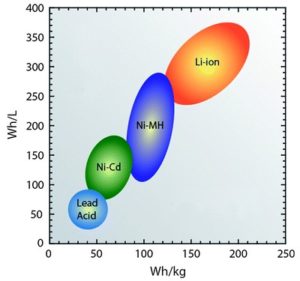 According to all publications on the subject, the maximum energy density of lithium batteries does not exceed 250 Watt Hour per kilogram.

This Page contains links to over 290 publications on lithium batteries and none indicate capacities over 265 Wh/kg.

Once again it is confirmed
than the batteries 18650 for over 3000 mAh
they are definitely scams. 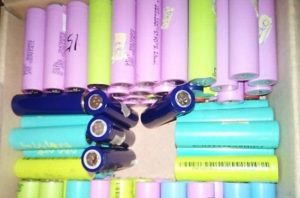 These batteries are tested one by one, so you can know the actual capacity before buying them.

Plus, you avoid disposing of perfectly functioning batteries and help reduce pollution.

We have written an application that measures battery capacity with great precision. 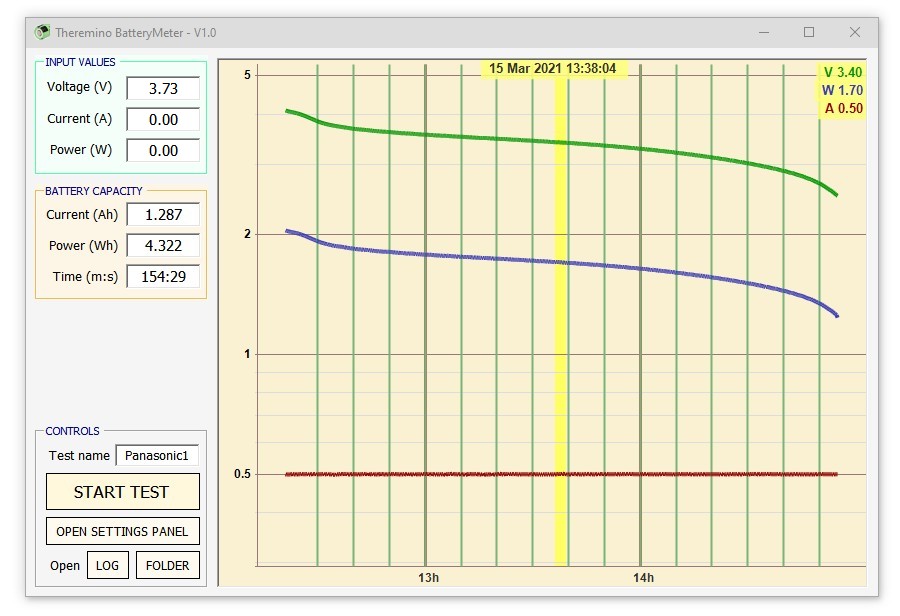 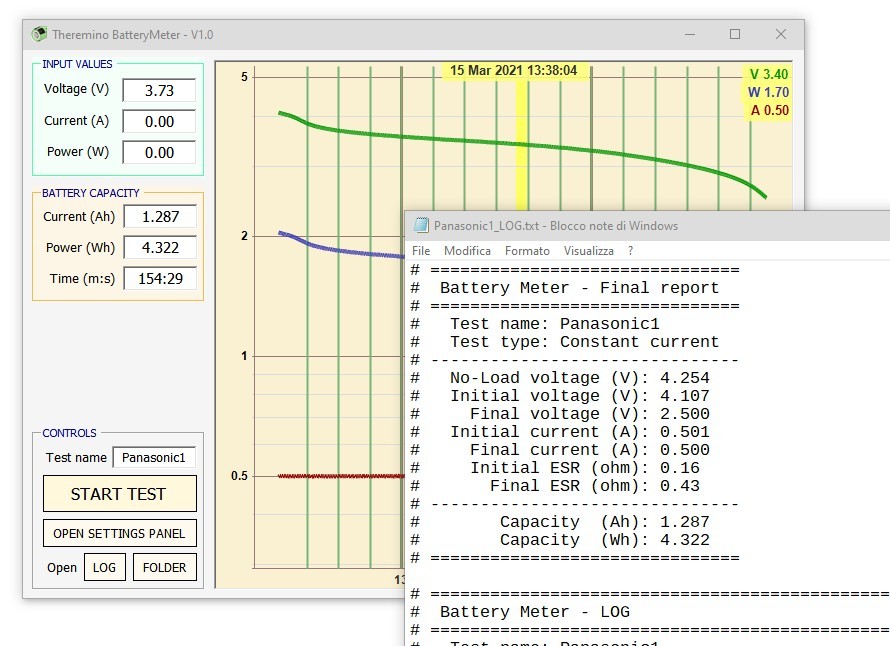 Features of the application “Theremino_BatteryMeter”

INSTRUCTIONS FOR USING THE APPLICATION 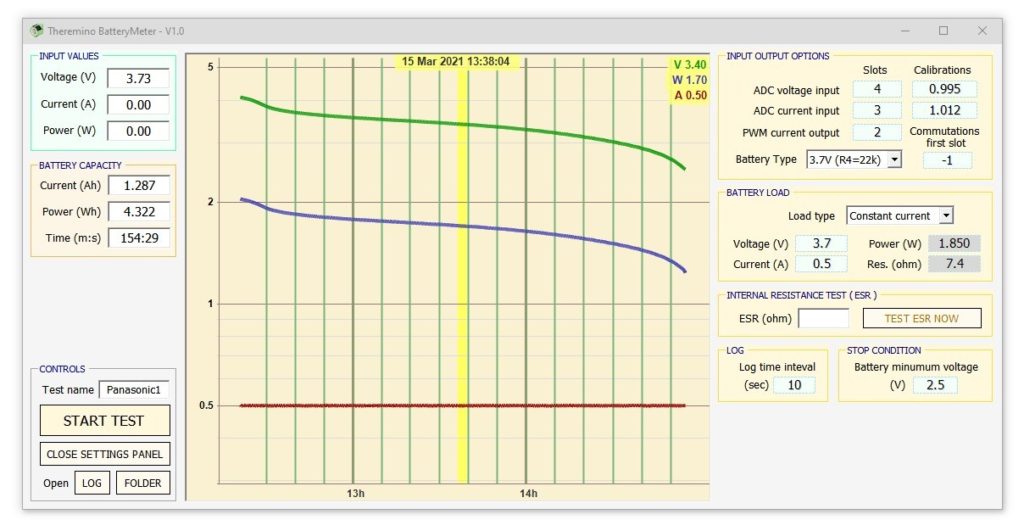 Panel on the right: INPUT OUTPUT OPTIONS
– Adjust the Slots to match those adjusted in the HAL application
– Regular “Calibrations” with the help of a tester. If you don't know how to do it, set them both to “1”.
– Regular “Battery type” for the battery type (see below how to match the hardware).

Panel on the right: LOG
– Adjust a time interval, they are usually used 60 seconds.

Panel on the right: STOP CONDITION
– Adjust the end-of-charge voltage, usually for Lithium it sets from 2.5 to 3 volts.

Left panel: CONTROLS
– Set the test name (for example the name that you write on the battery with a marker).
– Before starting the test make sure the battery is fully charged.
– Remember that the battery must make good contact in the battery holder.
– Press START TEST and wait until the end sound (usually from 3 to 5 about hours).
– Pressing START TEST again can stop the test early.
– The button “SETTINGS PANEL” opens and closes the right panel with settings.
– The Open LOG and FOLDER buttons open and view previous test files.

Left panel: BATTERY CAPACITY
– Current (Ah) and Power (Wh) indicate the capacity that grows during the test.
– Time (m:s) indicates the time from the start of the test in minutes and seconds.

We wrote it but it is good to repeat it. The previous test (rotate the battery) it must be done with the test started, ie with the green START TEST button. If the test is not started then the current is zero and the battery holder contacts are not stressed enough.

The two fine calibration boxes for the voltage and current are for the fussy eaters who want to reach accuracies of around one per thousand. A tester must be used to adjust them, connecting it in parallel to the battery first (and adjust the voltage) and then in series on the drums (the test is started and the current adjusted). But in practice the normal accuracy of about the 5% it's more than enough so you can safely set these two boxes with the value “1” and forget about it. If you use them, keep in mind that the settings are separate for each range you choose with “Battery Type”.

The battery must be fully charged before starting the test, it is recommended that you use a charger and try, at the end of the charge, if by moving the battery in the connector it is possible to restart the charge and add a little more.

To save time, you could adjust the discharge current to about one amp and do the test in an hour or two (with the 18650 lithium). But a smaller capacity would be measured and the problems of false contacts in the battery holder would increase. It is therefore advisable to use a half ampere current, which allows to measure the batteries 18650 in a time from 3 at 5 hours. Possibly lower currents could also be used, for example, 200 or 100 mA but the test time would increase a lot.

Under some conditions the temperature of the TIP42 transistor, of the MOSFET and of the load resistor R_LOAD, it could go up a lot. If currents over i 200 mA and especially with 6 or from 12 volt it is good to check the temperature of these components and eventually connect them to a larger heat sink.

Connect the battery only after selecting the right range (1.5, 3.7, 6 or 12 volts) and unplug it after finishing the test. If the flow rate is not right, nothing breaks, but the batteries from 6 and 12 volt could cause the USB communication to stop and you will have to restore it by pressing “You acknowledge” on the HAL application or by closing and restarting Battery Meter.

Be very careful to connect the batteries with the positive on the right side. By connecting the batteries from 6 volts up, you could burn the transistors, the MOSFET, the resistor R_LOAD, and the PIC of the Master. With batteries of 1.2, 1.5 and 3.7 volt shouldn't break anything but it's best to avoid it anyway.

The Theremino BatteryMeter application needs a special hardware and in the next chapters we will explain how to build it. They are few components but it takes a while’ of experience in electronics. Eventually have it built or have a kit made by Lello. You can find him on eBay as a seller “maxtheremino” or you can write him to: ufficiotecnico@spray3d.it

If you add one of the two Battery Meter Switch modules, you get the switching of the ranges from the software and you can measure all types of batteries, without manually modifying the resistor R4.

In this image you can see an example of the connections to be made. In this case the Master modules were used, Battery Meter V2 e Battery Meter SwitchSMD.

The heatsink in this example is abundant, in many cases a smaller heatsink could be enough but exaggerating a little’ you are more relaxed. Note the MOSFET and the R-LOAD resistor that have been pressed against the aluminum of the heatsink.

The battery holder has a good spring, we recommend paying close attention to the contacts and the spring, because maintaining a good connection with the battery is important and also quite difficult.

In a second trial version of the Battery Meter we tried using commercial battery holders purchased on eBay.

We were skeptical because if the battery does not make good contact the measured voltage drops, but the commercial battery holders performed better than expected. If you do a little’ be careful and rotate the battery to find the best spot you can definitely use them. 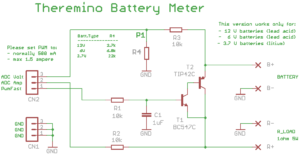 This circuit uses only two common transistors and a few other components. It can be used to measure lithium batteries from 3.7 volts and, replacing the resistor R4, also for batteries from 6 or from 12 volts (or even from 9 volts using the scale from 12 volts).

With this circuit you will not be able to measure batteries from 1.5 volts and from 1.2 volts, if you think you want to measure them use the next Battery Meter V2.

This V2 module replaces the previous one, but with the additional possibility of measuring the capacity of batteries from 1.5 volt and also from 1.2 volts. The circuit uses a special MOSFET with very low gate voltage (IRLB8721) which cannot be replaced with others, but that can be found easily on eBay. 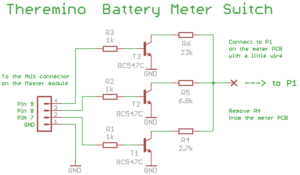 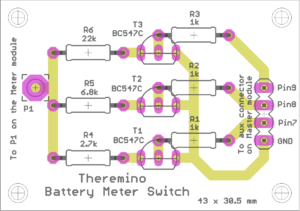 This form is not strictly necessary. It is only used to change scale automatically, by editing the box “Battery type” in the software.

Without this module to change scale you would have to manually replace the resistor R4 of the Battery Meter module, or use a multi-position rotary switch to connect the three 2.7k resistors, 6.8k and 22k instead of R4. 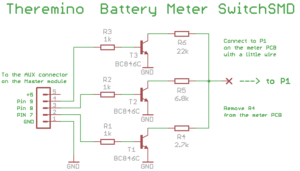 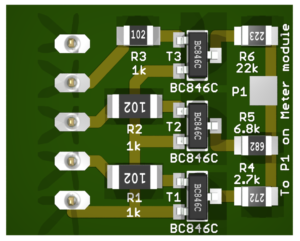 This module is identical to the previous one but in SMD version. Those who prefer to use traditional components can use the previous version, also buildable on a millefori.

This SMD version is designed to have a small and light module. So light that it can be plugged directly onto the Master connector and do without screws and the connecting cable.

Without this module to change scale you would have to manually replace the resistor R4 of the Battery Meter module, or use a multi-position rotary switch to connect the three 2.7k resistors, 6.8k and 22k instead of R4.