Note the protocol name
The name “Dilbertian” comes from the first version of this protocol, we called “IDP Inverted Dilbertian Protocol” (2010), where zeros were represented with a cell “thin” and with a cell “large” (“0” skinny and “1” fat – the inverse of the following strip from “Dilbert” by Scott Adams – www.dilbert.com).

Because a new Protocol ?

Theremino the system aims to provide a simple Input-Output System for PC, cheap and easy to use. To make it easy to use auto-numbering are needed and the recognition of their types, to simplify and minimize the cost of the links is necessary to communicate on a wire only.

There is a similar protocol we had to write it. The current version collects the best of many years of experimentation and research.

The transmission takes place on a single wire, but you need a reference mass and a supply voltage, to where the wires are normally three.

The connectors are normally used by 3 poli, with spacing of 2.54 mm.

On the communication chain should have a Master (providing power and timing) and a number of devices connected in cascade (called Slave).

The tension that the Master provides on line is 5 V, with the same tolerance and with the same maximum current of 5 V that withdrawing from the USB connector.

The maximum current that the Master can provide limits the number and type of devices that can be connected. This current, is normally 250 mA, and may be increased up to 500 mA. Going over it would exceed the capacity of the USB ’ and would impose unusual features to the connectors.

Both the “Master” that the “Slave” are connected to the line with a damping resistor, It also acts as a low pass, radio interference and overvoltage protection. The value of this resistor is normally from 33 to 330 ohm resistor

Times, distances and number of bytes

All devices must implement at least the speed “7” that is considered the default speed. If you want to set a different speed from the “7” all devices in the chain must support it.

The “maximum distance” depends on the characteristics of cables, the table values are calculated for a shielded cable RG58 from 50 ohm with ability to 100pF per meter.

At low speeds the number of “slaves” is limited by the maximum number of bytes that can be transmitted in 30 milliseconds. (each slave uses at least one byte and you claim a repeat fast enough to make fluid movements)

The capacity was calculated on the basis of 30pF per “slave” plus other 20pF to a connection cable from 20 cm and other 10pF to take account of the additional resistance due to “bilateral switch” (total: 60pF)

In the calculation of the distance we take into account that the voltage drop on the ground, does not exceed 200 MV. The voltage drop on power cable, not causing transmission errors, It can also be much higher (the 5 V can drop down to 3.3 V without creating problems) In case of shielded cables on ground is the screen, which usually has less resistance than declared, so the distance will be greater.

The values of “maximum length” indicated in the table above are valid only for connecting cable with a capacity of approx. 100 pF per meter. The following table shows the corrections to be applied for the most commonly used cables.

There are also low-capacity cables (little used and hard to find):

Measure the ability of an unknown cable:

The devices are labeled with a number from 0 to 199 identifying her "Type".
At the stage of recognition and numbering each device identifies itself with this "Type".

Currently are defined the following devices:

The pins are labeled with a number from 0 to 255 identifying her "PinType".

(*1) Service commands.
(*2) The command is only used by the master and the slaves Recog during recognition.
(*3) Fast communication – the master exchanges the values of all slaves using only one USB Exchange
(*4) Communication commands to the single slave
(*5) Special commands

GetBytesFromSlave law generic bytes (for example of State), from a slave (Physical forms on the Master or virtual Slaves)

All commands have codes from 200 to 255, to prevent, in case of errors, IDs and slave types (from 0 to 199) could be interpreted as a command. (Setspeed doesn't count because it is never sent over the serial line but only by HAL, to the Master, via USB)

Commands from “Host” to “Master”

Responses from “Master” to “Host”

The zero position of the USB Buffer indicates whether the command was executed from “Master” successfully.

Calculation of the CRC

All CRC used are calculated over a certain number of consecutive bytes and the CRC result is a byte. CRC calculation using an algorithm based on "Longitudinal redundancy check".

The resulting CRC algorithm is efficient and extremly simple.

Calculation of the CRC used in this Protocol

If you decide to use a baud rate other than the default one, then the "master" should communicate to all devices in the chain the new speed.

This setting should be possible even before making a loop device recognition and must be also possible with very long transmission lines. Therefore there is a special command that is now shown. 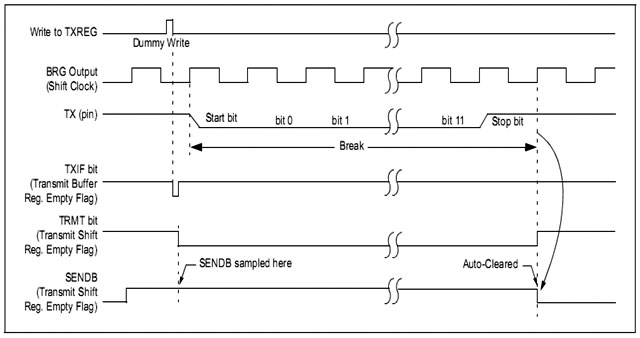 If you set a speed too high for transmission line in use some devices in the chain may not be able to support the speed setting and errors can occur when transmitting data.

If transmission errors are zero or less than the 0.1% then the speed set is valid.

…. the “253” (type request) repeats up to 200 times
When no longer responds to a duration greater than 10 bit at current throughput, means that the chain is over. To avoid this calculation, You can use a time-out of 12 Ms that always works, even at the lowest speed.

9 – The Master issues toward the slaves all setting sequence "Speed", that shows all the slaves in the normal communication mode.
10 – The Master informs the Host (PC) via USB Slave recognized number and type of each.