For testing on foods, It would be useful to identify a material, hard enough and at the same time, enough transparent to the beta radiation.

Gamma rays pass without problems, in all materials thin enough, from route beta. Instead alpha rays don't serve for food, do not pass even through the same substance of the food and just a thin film layer (two hundredths of a millimeter) to stop them almost completely. So the only radiation to watch out for are the Beta rays.

Attenuation test it is recommended to use dietary salt containing potassium. Potassium (K40) emitting primarily Beta rays and very few Range. In the following pictures you see some evidence, on various plastics. 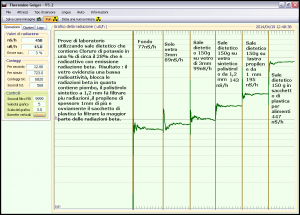 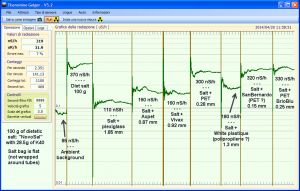 These tests were done by pouring 100 or 150 grams of dietary salt, in a bag of plastic wrap for food.

Make sure to have comparable measures you must begin with a limp bag fit around pipes. In these tests the bag of salt was put down on the table and never moved so as not to deform. Geiger pipes were appeggiati two side supports of variable thickness.

The following test was done to measure the attenuation produced by distance. 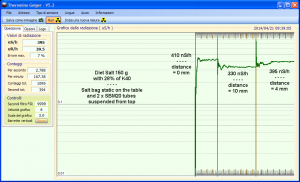 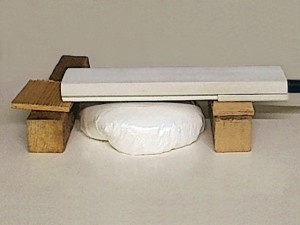 Testing at different distances, without plastic, only air (click on images to enlarge them)

The attenuation with 4 mm air is minimal and even with 10 mm is minor annoyance. In this test the salt bag had approx. 6 centimeters in diameter, It was the largest number of rays lost, right and left tubes, It would have been even less.

In conclusion, Since measuring foods usually are big enough, a distance of up to 5 mm influence little the measures.