Physics Open Lab – The “Big science” for the Makers

A fantastic “Lab Open House”, where share technologies, materials, documentation and experiences, created by a group of "makers" passionate about science.

Describes experiences of experimental physics, can be made with the system Theremino. We make experiments to see and touch the main concepts of modern physics, as the wave-particle duality, the quantization, radioactivity and also the strange phenomenon of entanglement.

Video link, and the configuration of modules

In these two videos you can see how’ simple connect modules and configure them. In a few seconds, and without interrupting the operation, It is possible to connect new sensors, assign new or different functions In-Out pins and let them communicate with each other. Possible configurations are endless and long distance connections are also possible, via serial, local network or Internet. All without writing a single line of code.

These two videos show the same thing from two different points of view, the first and second hardware software. Do not show all possible operations, but give an idea of how to make the connections between the modules and how to use the HAL program to configure the pin and let them communicate with each other. 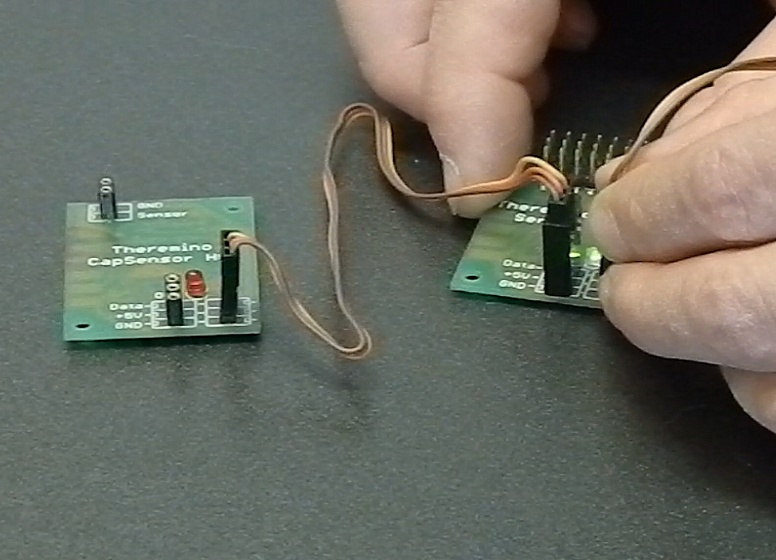 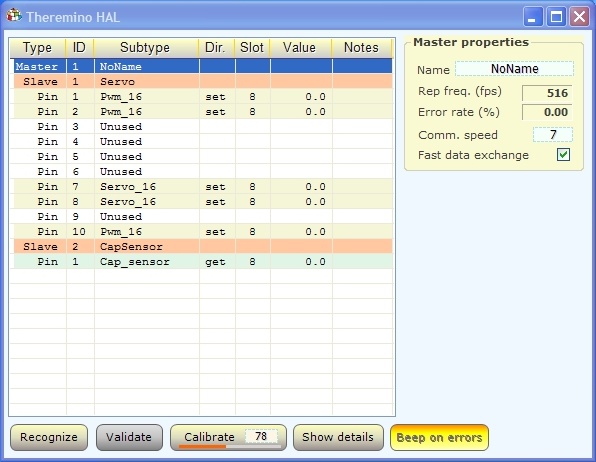 Video with sensors and servos

Theremino_Cap_Sensor – Video of the sensor CapSensorHQ (adjusted for small distances)

Theremino_Magnetic_Sensor – A magnetic sensor A1302 of Allegro Microsystems

Theremino_CapTouch_Sensor – A video about capacitive buttons (comfortable, fast and without water)

BrushlessMotorControl – A video on the control of brushless motors

In these videos the sensors, the LEDs and the servos are connected to the same form but may be located each on a different module, even far away, and it would be just as easy to make them work, This will only change their “Slot” (in ThereminoHAL) or their network address (in ThereminoOSC)

Video and images of the program ThereminoGeiger 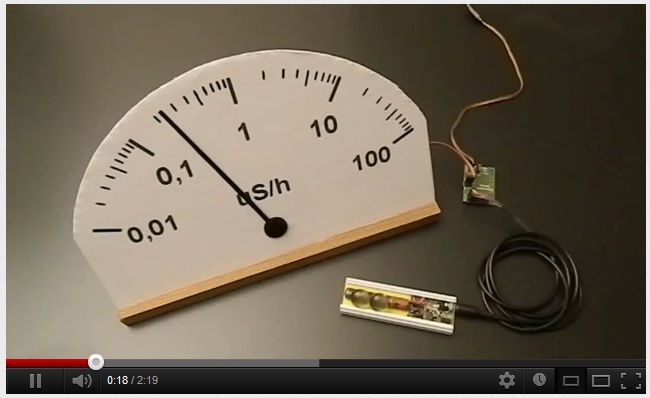 In this video we see the ThereminoGeiger that, taking advantage of the modularity of the system Theremino, sends the measured result to an actuator located behind an analog scale. In this example the sensor, the software and the analog scale are close together but may also be in different locations and communicate via Internet (without writing a single line of code)

In the first part there are no radioactive samples, then you add two scoops of uranium glass and finally a sachet containing Thorium gas mantles made from camping lamps. (to learn about the characteristics of these test substances, see Appendix 1 view the article) 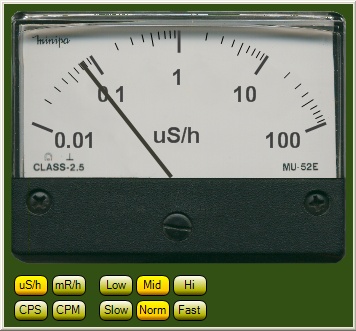 This is the analog of Geiger, useful for quick measurements and for those who are more comfortable with old Geiger counters and CPS and CPM units. 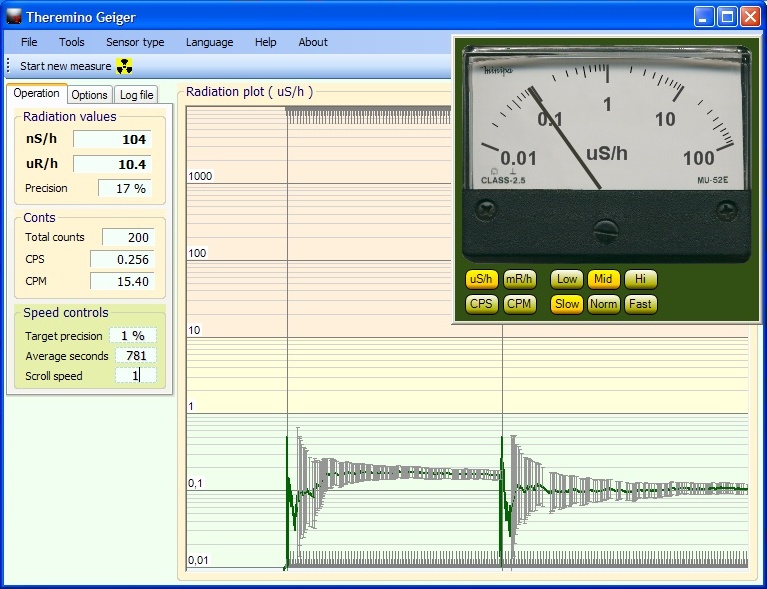 –
Analog tool can be “docked” (hooked) the main program that serves for the measures on time and who also acts as “scaler” And how “ratemeter” so you can accurately measure very low levels of radioactivity.
– 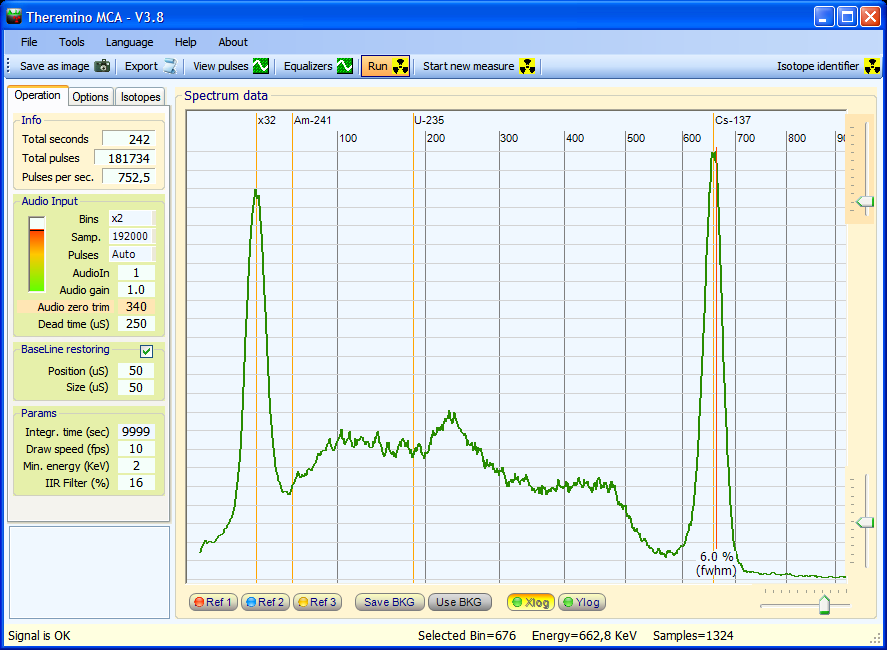 Theremino_mca is a Multi-Channel Analyzer accurate and easy to use. The versions 3 and 4 they have improved a lot the resolution and extending to the lower energies. 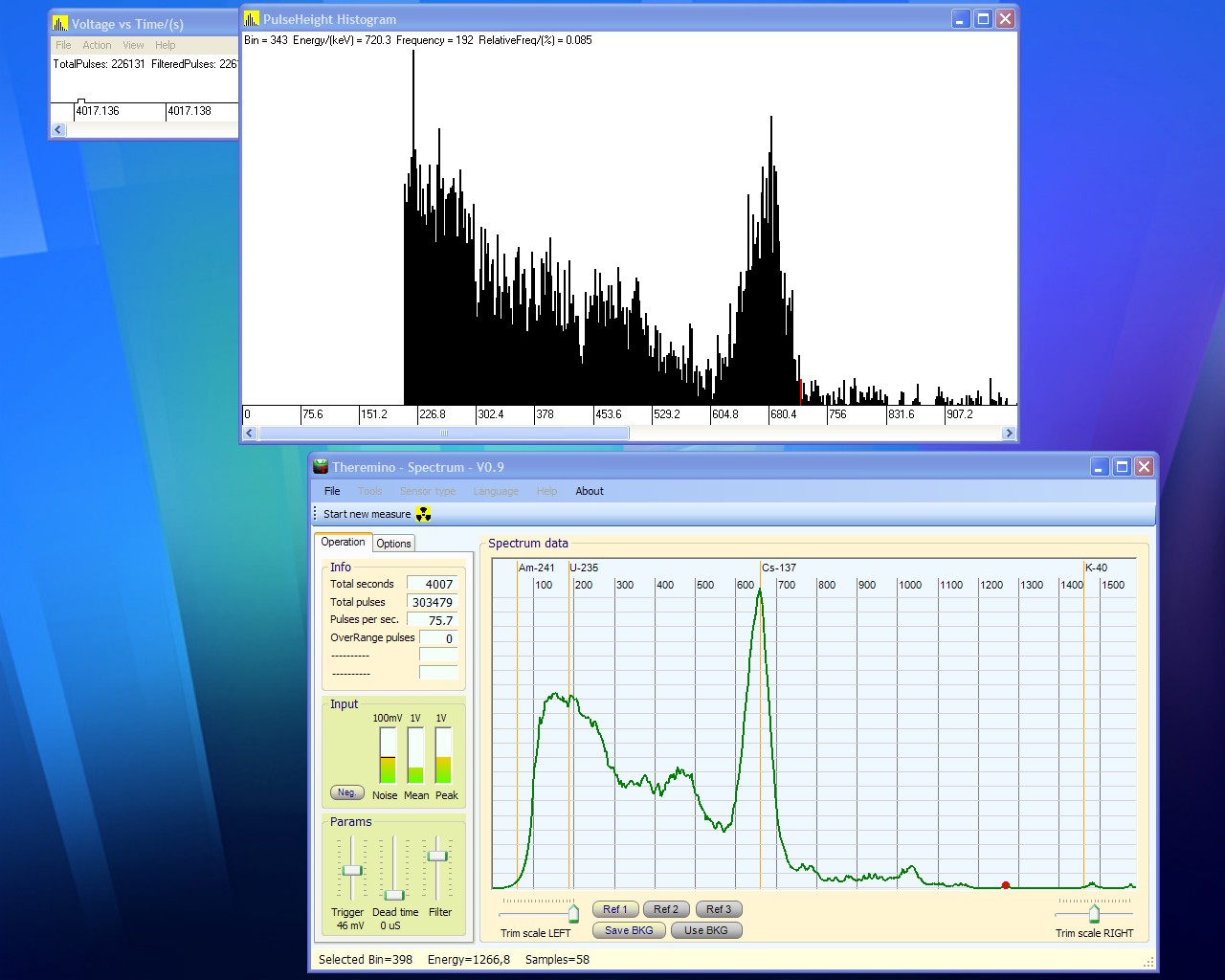 In this Video_YouTube you see the Theremino_MCA that in less than 30 seconds provides very detailed information.

The impulses come from a NaI Crystal(TL) with Hamamatsu photomultiplier R6095 and from a sample that contains a small amount of cesium-137 (to be precise, a Raytheon CK1097 model-7, the less radioactive among such tubes)

Videos and pictures of the ThereminoArm robotic arm

The robotic arm consists of a servo HXT900 and three TGY930, including one in bed and barely visible. InOut modules are a “Master” (Yet one of the prototypes with SMD components) and a Slave of type “Servant” in this example, the four pilot servos but that could fly up to ten. As soon as connected to USB on ThereminoArm immediately begins work, without installing drivers, and it draws power from the USB port.

Mechanical construction of the RobotArm
In this file you will find the construction details for a small robotic arm. (the draft submitted to the contest make4cash of the magazine OPEN SOURCE ELECTRONICS)
Robotarm (PDF file with mechanical and electrical details)

Theremino_Arm – A video of the robotic arm that writes.

Upcoming videos show the good precision in running a small design and exceptional repeatability in reviewing the design with mistakes around the tenth of a millimetre, virtually invisible even with a high magnification.

The next video shows that the mechanics are rigid enough to be able to grind soft materials like wax, SOAP or balsa wood. This is just a demonstration, similar work would be good to increase the rigidity of the structure by replacing the plastic and nylon parts that fit on the servo with brass or aluminium parts.

The next picture picks up months of evolution of RobotArm in six auditions. The images were made with the test file “Cross.tap” Annex to the software “Theremino.arm” of the page downloads. 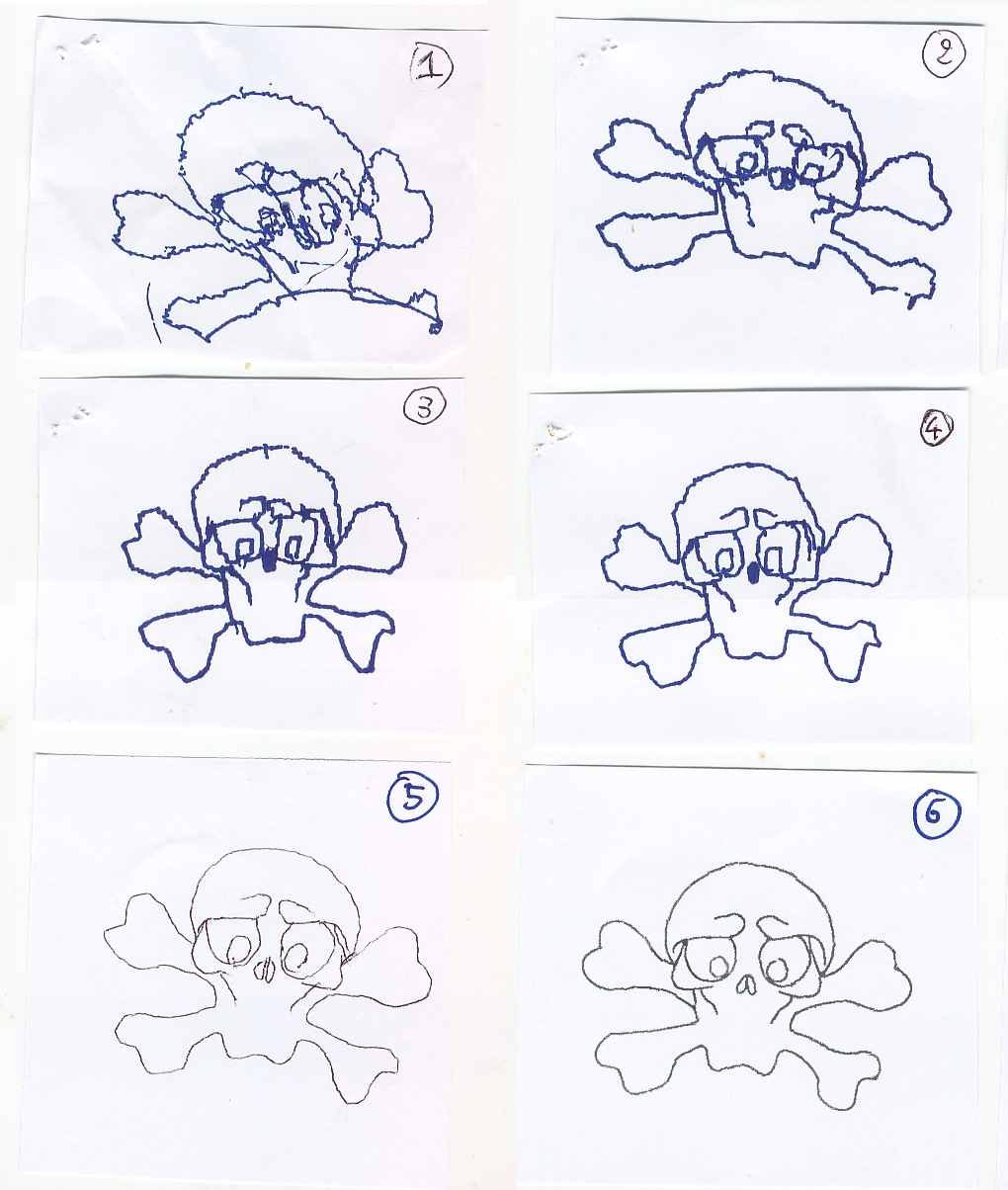 Starting from the image 1 until the 6, We have repeatedly changed the size of the arms, software algorithms and finally the model of the early digital servo TGY930 TG9e to the finals (the most precise that we found). The sixth image, almost perfect, is obtainable only with a lot of experience, using gel ink pens, softening the paper by superimposing multiple sheets, using short arms that produce a limited range (16 x 8 cm) and just by drawing in the best area (with little arm extended).
–
In this video we see how the new algorithm of path (almost ten times faster with the same precision)) ThereminoArm NewAlgorithm

Use a GamePad for axis JOG:
https://www.youtube.com/watch?v=NCjrHcDag6w

Three videos featuring Theremino system components used in the production of microwave cavity filters in Shenzhen, China:
Video1 – three modules Theremino-Master are the heart of the machines.
Video2-workers who assist the production of filters.
Video3 – engineers and technicians during the development of the system.

Video and pictures of the Theremin Synths 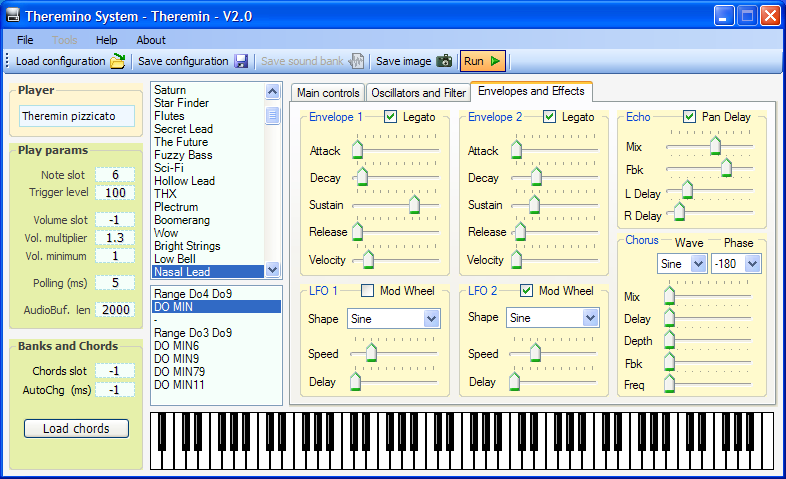 Click the images to enlarge them !
These videos illustrate only the technical performance of the instrument. The musician (I) sounds bad almost all the tools: Guitar, keyboards, bass and percussion. He also tried to play the violin and the hunted by the Group, for the record likes and dislikes “The Night Rovers” and the name was written on the case as “The Beatles” and “The Rolling Stones”

Rapid prototyping and 3D visualizations have enabled us to quickly go from ideas to finished modules.

Pictures of prototypes and pre-series

Theremino system modules are the grandchildren of these prototypes, Here are the few who escaped the destruction. Many others were disassembled and gone are the container of scrap metals. Each prototype cost us countless hours designing and testing for which we like to keep them, with affection, in these pictures. 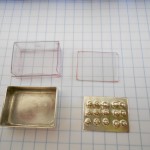 Even these electrodes have cost a lot of work, the shielding box, with silver contact tips, to cross the hair without conductive gel, It was made of silver from Marco Vitali of: www.vitalibruno.com We thank you for your cooperation.

Active electrodes worked properly, but they are now overtaken by electrodes “Non-contact” that give a better signal even if the patient moves, without cleaning the skin with alcohol, even through clothing. The electrodes without contact work to capacity so don't need silver and give the 100% of security because the patient is electrically isolated. For future developments see here: blogs/biometry

Images of the modules produced by external retailers 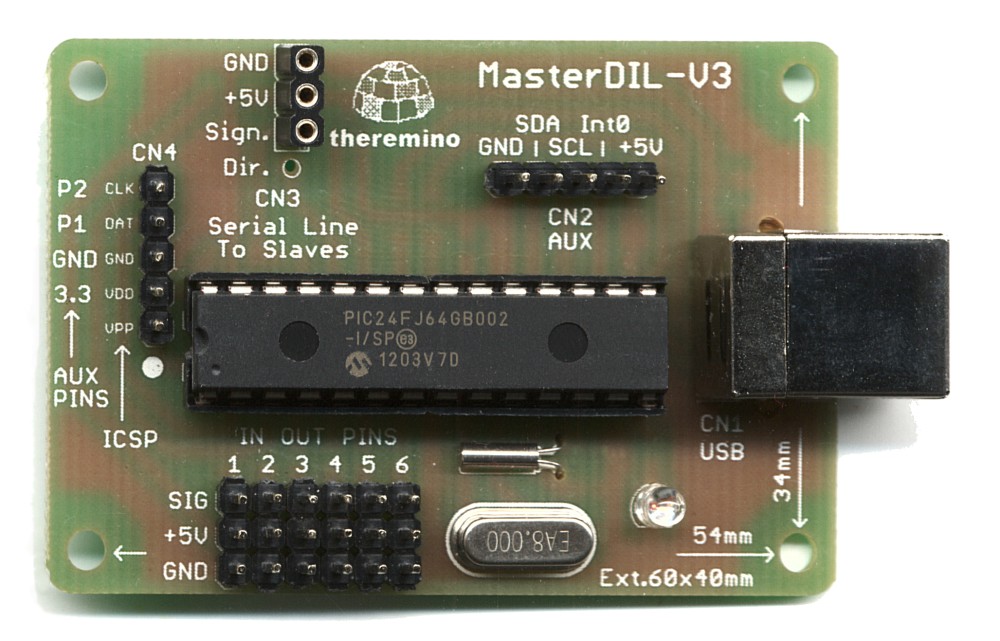 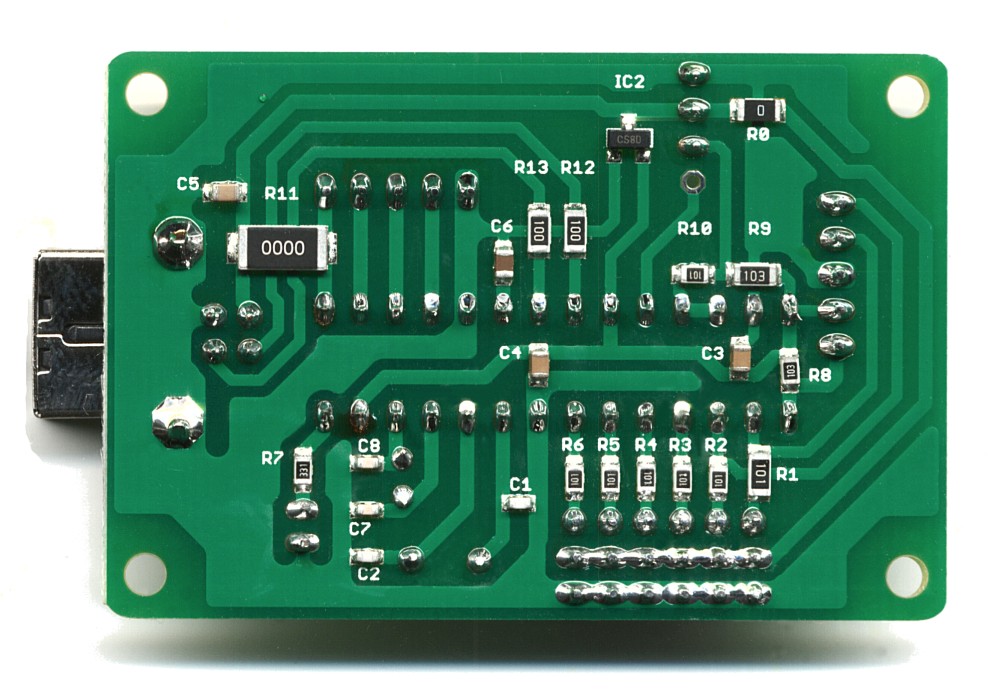 The Master V3 – solder side 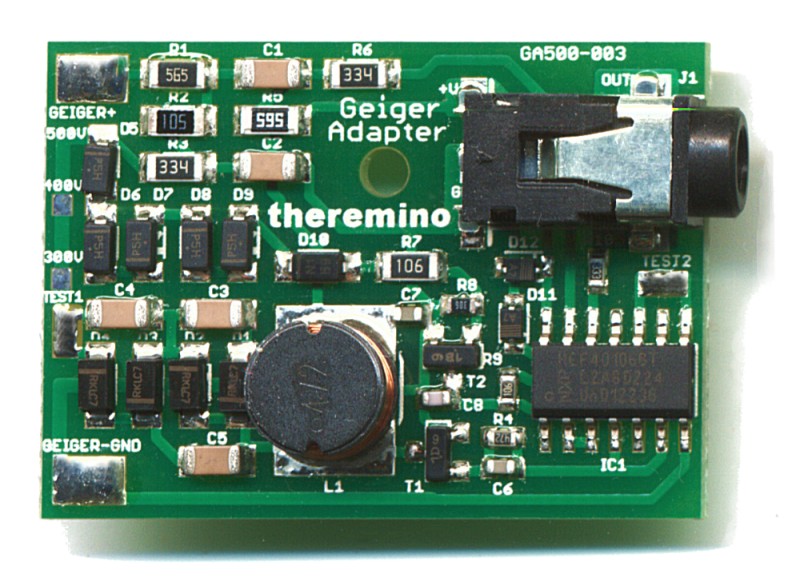 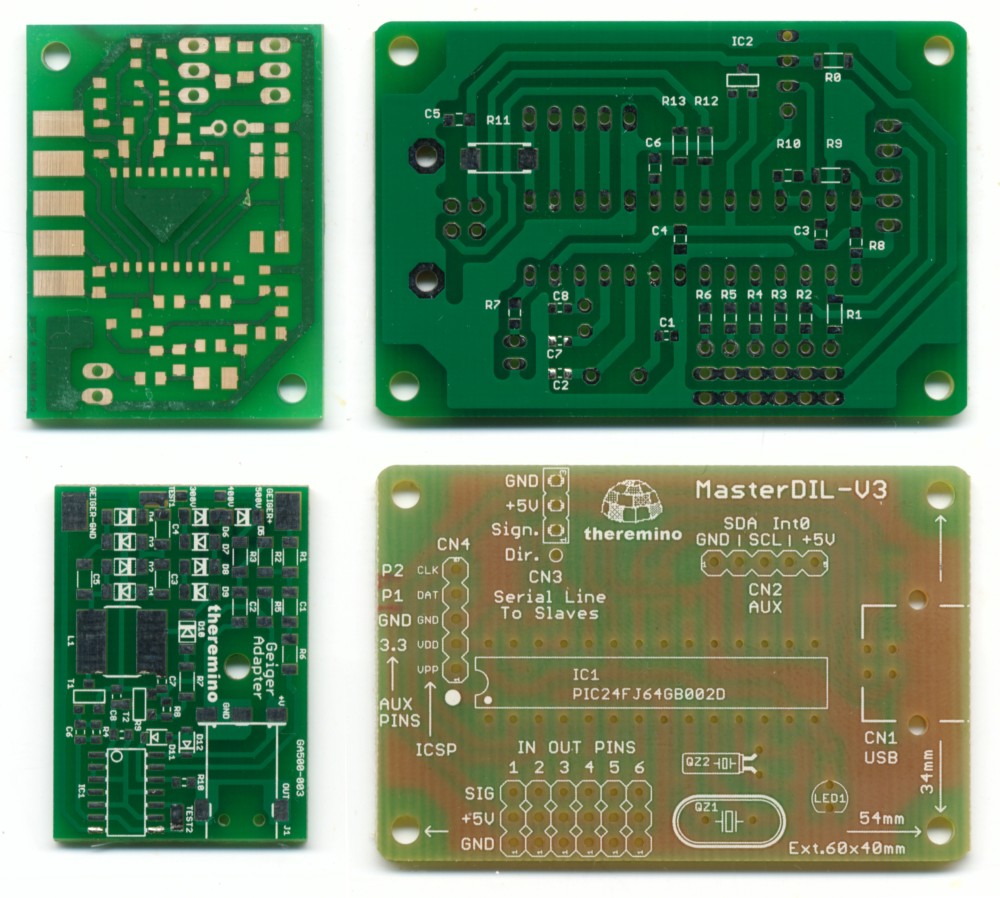 The PCB to mount manually 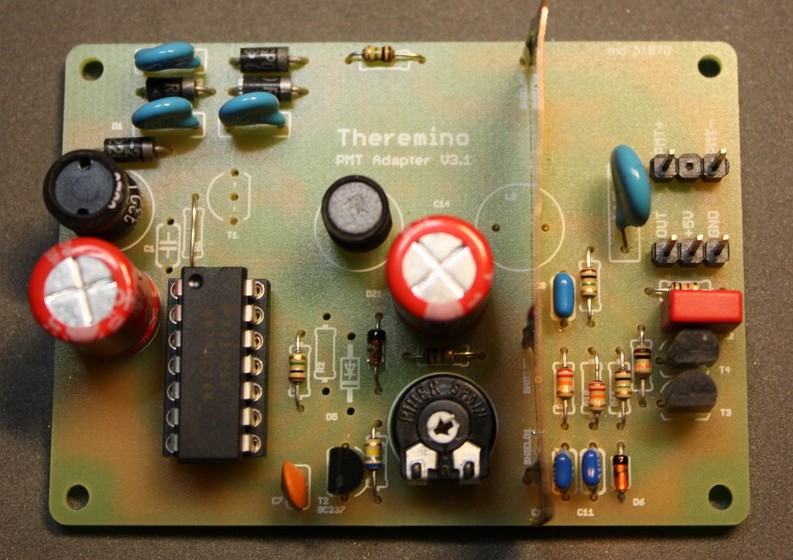 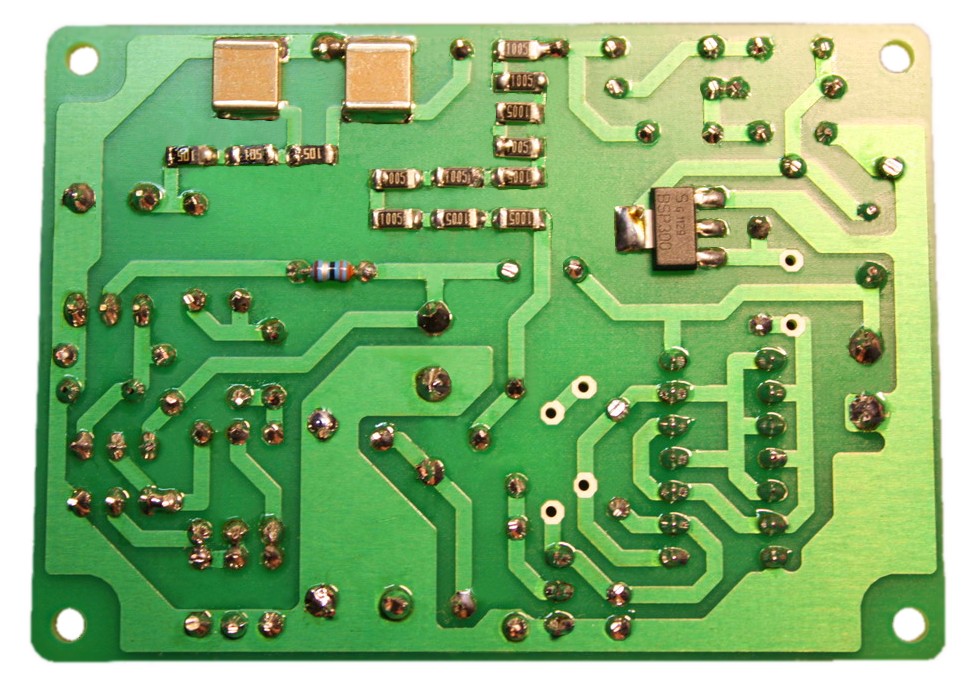 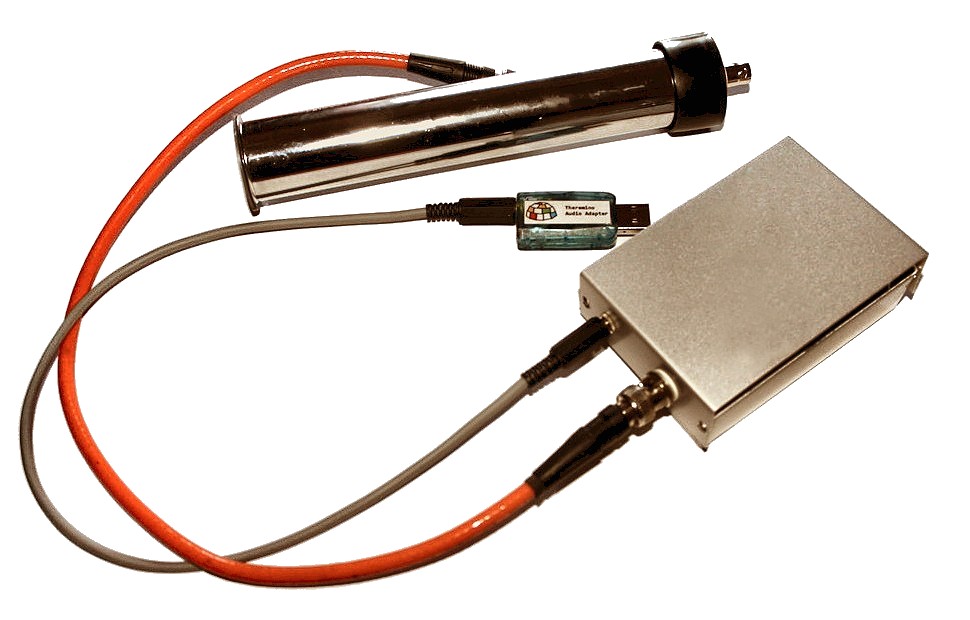 The complete system for the Gamma spectrometry and XRF 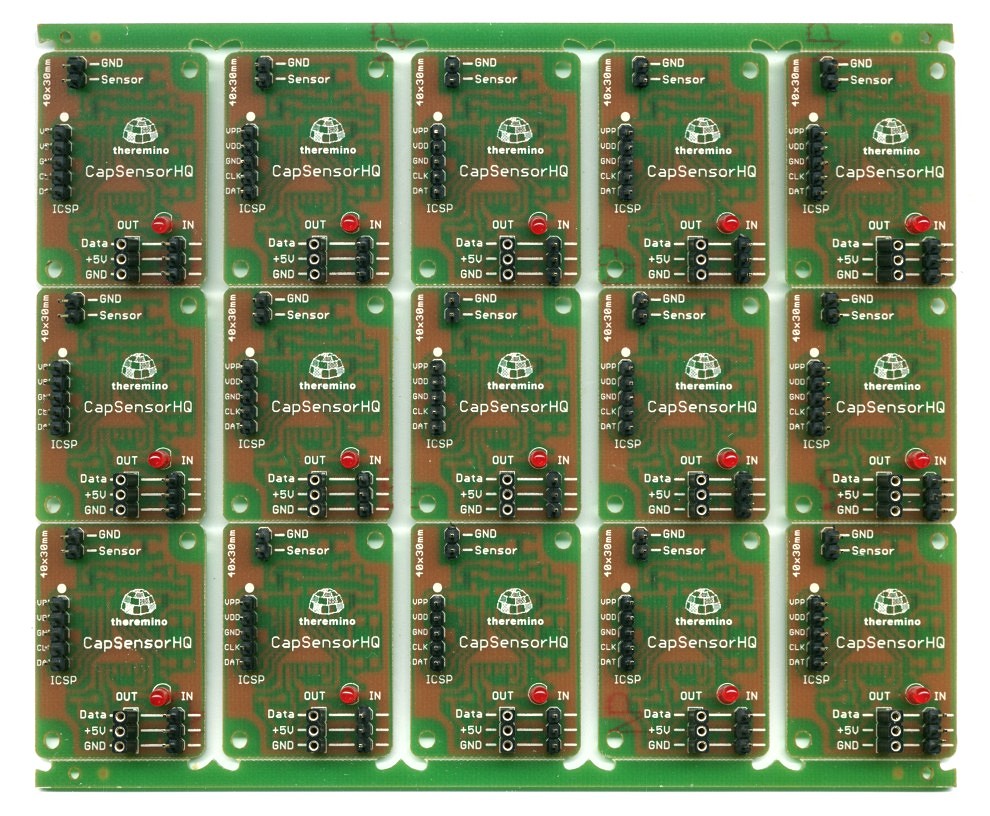 We remind everyone that the team system Theremino doesn't produce and doesn't sell anything. These images relate to forms generated by retailers that operate independently. Retailers do not have any connection with us and we are just a bunch of electronics enthusiasts, not for profit.